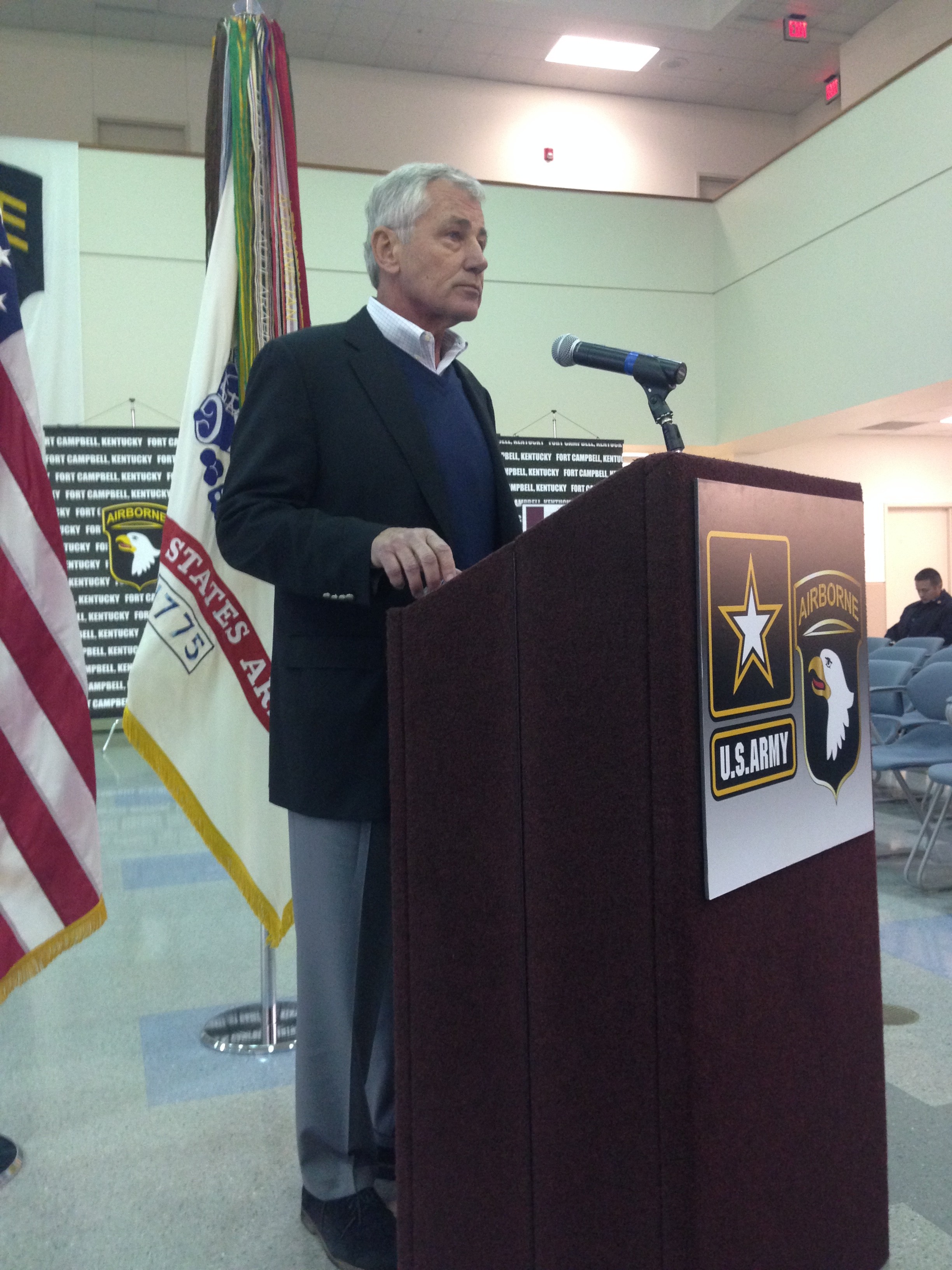 Secretary of Defense Chuck Hagel has been asked the question over and over again, “What does the military have to do with Ebola?” His response? “That’s a legitimate question.”

Hagel spoke to members of the 101st Airborne Division at Fort Campbell on Monday, Nov. 17. The soldiers in attendance had either just returned from deployment or were about to deploy, including soldiers going to Liberia to assist the containment of Ebola.

Sgt. Matthew Bartlett is in electronics maintenance and will soon join Operation United Assistance in West Africa. “Obviously it isn’t like other deployments,” Bartlett said. He said he feels “apprehensive” and “nervous about the lack of communication,” when it comes to the upcoming mission, but Hagel may have quelled those nerves.

“World order is shifting like never before,” Hagel said, adding that the problems of the world “aren’t just terrorists anymore,” but pandemic health issues, such as Ebola. “It is in our best interest to [contain Ebola in West Africa].”

Hagel stressed that the safety of the soldiers and their families is always the priority. “[The president and I] wanted to ensure your safety.” Hagel said. He went on to stress that the Department of Defense will never send military men and women into situations that they are not     prepared for.

Hagel made mention of a military spouse who shared the concerns of many. Without giving names, Hagel said the soldier came home to his wife nervous when he first found out, but by the end of training said to her, “I think this might be my healthiest deployment.”

Hagel said the 21-day quarantine policy would be ensured upon every soldier’s arrival back to the U.S.

Congresswoman Marsha Blackburn was in attendance and spoke about APSU’s involvement at Fort Campbell. “One of the things we continued to do that we think is helpful in working with APSU is the ability [of APSU] to come on post.”

Blackburn mentioned the importance of active-duty military getting their degrees and added that several years ago, congress was able to include APSU as a part of the Department of Defense and National Security curriculum.

Blackburn said that to keep the benefits congress has been able to give the military, they must also keep it properly funded.

“We can’t afford to take cuts like we have been without disastrous results,” Hagel said. Hagel also said he has been in agreement with the recommendations to deal with said cuts presented to him by Chief of Staff of the U.S. Army General Raymond Odierno and said, “Yes, force structures are coming down,” adding that if the steep cuts continue, “the choices our chiefs have will be limited.”

Hagel said he has “long admired” the 101st Airborne ever since his time spent in Vietnam.

“Fort Campbell is a critically, critically important base,” Hagel said.

Hagel and his team left the afternoon of Monday, Nov. 17, for Camp Lejeune in North Carolina and should return to Washington, D.C. by the end of the week.