Jessica Axley of the Vagina Monologues perform skits on Tuesday, March 26 and Wednesday, March 27. The performances aim to raise awareness of how much violence against women affects our communities. Drew Kirk | Staff photographer

APSU welcomed the return of the Vagina Monologues on Tuesday, March 26, and Wednesday, March 27. Both performances were held in the Clement Auditorium, the first night featuring a cast of students and the second featuring faculty and alumni. The Women’s and Gender Studies Program organized the production.

The Vagina Monologues is an annual production that raises money to help end violence against women, including incest, rape and domestic violence.

“The stories [in the production] bring awareness to the various experiences that women have that [audiences] would not otherwise learn about,” said Lee Gray, who teaches Introduction to Women’s Studies at APSU.

Gray thinks they help people understand how to stop the cycle of violence. 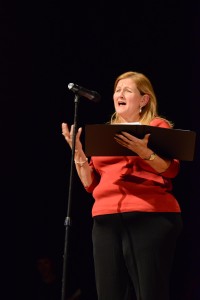 Debbie Neely Striclyn of the Vagina Monologues perform skits on Tuesday, March 26 and Wednesday, March 27. The performances aim to raise awareness of how much violence against women affects our communities. Drew Kirk | Staff photographer

“We can’t stop the cycle of violence or solve the problem until we know what it is. The Vagina Monologues is a good way to educate people,” Gray said.
Jill Eichhorn, Coordinator of Women’s and Gender Studies and professor for the Vagina Monologues course, said the monologues have two main themes: awareness of violence against women and the need for community.

“What I watch year after year is women stepping out of the isolation, either their own abuse or the isolation of knowing someone who has been abused,” Eichhorn said. “We bring the problem out into the open … Instead of hiding it in secret, we can address it.”

The Vagina Monologues production at APSU and at different venues across the world is sponsored by the V-Day College and Community Campaigns. APSU has held the Vagina Monologues as a part of the college campaign since 2002, when V-Day first started the movement.

According to Eichorn, Eve Ensler, the activist and author of the Vagina Monologues, donates the monologue’s script to community organizations and college students who perform the show The performers then raise money and donate it to agencies that assist women or survivors of violence.

V-Day is an international organization that promotes creative events to increase awareness, raise money and revitalize the spirit of existing anti-violence organizations. The ‘V’ represents victory, valentine and vagina. V-Day was first established on Valentine’s Day 1998 by Ensler and a group of friends after the immediate success of her play. Since then, the organization has grown and is now in 130 countries.

A video of students participating in the V-Day program One Billion Rising introduced the show on Wednesday, March 27. One Billion Rising took place on February 14 and encouraged women to gather together and dance or “rise” against crimes and violence against women.

“One Billion Rising is the idea that one in three women in the world will either be raped or beaten in her lifetime,” Gray said. “You think with how the population of the world is around 7 billion now, and women are half that population — so around 3.5 billion. So 1 billion women are going to be assaulted. That is too many.”

Gray encouraged her students to participate in One Billion Rising on the UC plaza, “I rise because there was a time I could not rise. I rise for those who reached down their hands to show me how to rise. I rise so others might rise.” 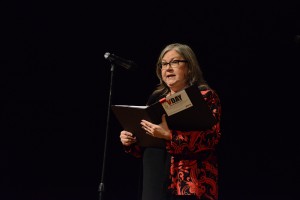 The beneficiaries of the 2013 APSU Vagina Monologues are the Clarksville SafeHouse, Legal Aid of Middle Tennessee, and the Sexual Assault Center.

RC Lund, one of the student directors of the production, explained that The SafeHouse in Clarksville is a place where people go if they’re a victim of domestic violence. They provide shelter and legal assistance through Legal Aid of Middle Tennessee.

Easton Cecil, student and friend of one of the Monologues’ cast members, said he enjoyed the production, “I learned a lot about the women’s perspective of abuse, rape, physical and emotional [aspects] and how they feel about themselves.”

Eichhorn believes the monologues are an important tradition because it gives everyone the opportunity to transform the community to be a place where everyone respects each other, rather than dominate and violate each other.

“Fathers, brothers, uncles and grandfathers have daughters and mothers and sisters and wives; everyone is affected when someone has been violated,” Eichhorn said. “It takes learning, investment and strategies of how we’re going to resolve our conflicts.”

Wendi Spanogians, an APSU alumna and member of the alumni show’s cast, discussed how The Vagina Monologues is something everyone should see, and how the play was instrumental in her own coming out.

“It is such a powerful piece,” Spanogians said. “The whole play is an emotional roller coaster for a lot of people who see it.”
Sera Huff, an audience member, suggested that everybody should see The Vagina Monologues at least once.

“The shame that goes along with the word ‘vagina’? There’s no use in being ashamed of a word,” Huff said.

When asked if she had a message for any women struggling through abusive relationships or any kind of struggle, Eichhorn said “There are numbers for hotlines, there are resources in our community in Clarksville that are waiting to help … It’s a two-pronged step, but I would say the primary message is if you ask for help, people will help you. If you try to bear your suffering alone, you will be locked in it. To reach out and create a community for yourself is the path of healing.”

Legal Aid of Middle Tennessee, SafeHouse and CenterStone offer assistance and counseling to survivors of violence.

“The women who participate in [these shows] inspire me to watch women grow and change and learn to support each other,” Eichhorn said. “In a culture that really teaches us to compete with each other, the Vagina Monologues teaches us to reach out and connect and through that process — it inspires me to continue to do the work.” 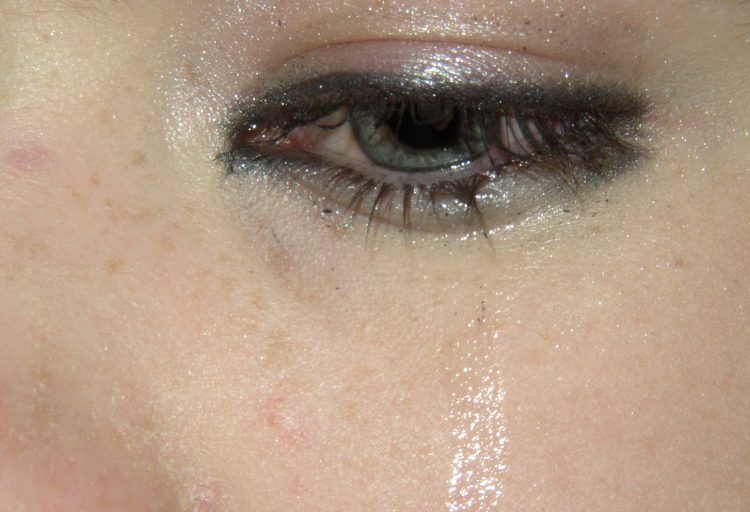