You walk past people every day. On the street. On sidewalks. In buildings. You have class with different people. Every day. Every semester. Every year. People walk past your life sometimes without a single word. Each one has a story. Stories of love. Of loss. Of hope. Of struggle. Of victory. Everyone has a story, even you. 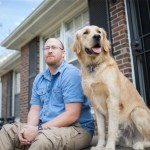 Cauthen depends on the companionship and aid of a golden retriever named Jackson. Cauthen opens up about his struggles with mental health while Jackson nuzzles up beside him. Photo credit: Taylor Slifko

Cauthen, 34, stands tall with an average build. With his cane and his dog Jackson by his side, Cauthen walks slow and steady as if he thinks about every step he takes. Kind in nature and stoic in speech, Cauthen speaks with a calming voice and kind-hearted soul. He comes across as your typical, positive fellow except for a small strain of pain that remains constantly on his face.

Jack of all trades

Before coming to APSU, Cauthen lived many lives.

After a two-year certification at an Arizona school for sports medicine, Cauthen became a licensed neuromuscular therapist in 2002. He worked on patients with neurological issues through manual massage therapy. Cauthen worked for the Arizona Diamondbacks, Arizona’s MLB team and for the Phoenix Suns, an NBA team. He also spent some time alongside chiropractors in different sports clinics across Arizona.

Cauthen moved to Montana to work at Yellowstone National Park only to return to Arizona in 2006 to marry his wife, Traci, 41.

“My wife, bless her heart, she’s a strong woman, very strong woman,” Cauthen said. “A lot of communication between us. She’s a good advocate for me.”

Two stepsons came with the marriage, Jonathan, 17, and Andrew, 20.

There was no insurance for the boys or for the family. Cauthen had to make a decision for his family’s sake. He joined the Army in 2007, moved to Fort Campbell on the Kentucky and Tennessee line and was deployed to Afghanistan soon after.

While in Afghanistan, his life forever changed.

Cauthen was “medevac-ed” from Afghanistan where he was deemed medically retired shortly after. That didn’t stop him though. 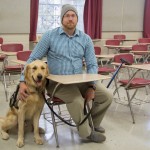 Nearing the end of his undergraduate career, Cauthen reflects on his time at APSU while remaining focused on his goal to obtain his degree. Photo credit: Taylor Slifko

Once medically retired, Cauthen became a full-time student at APSU in 2009 where he majored in biology at first, but quickly changed his major to public relations.

“When I started to do my education classes to be a high school teacher, I found out that as a teacher, especially in the science field, you don’t have control of your classroom,” Cauthen said. “It’s all about having to be this far in the curriculum and then next week you got to be somewhere else and I’m a big believer if kids don’t understand it, we’re going to keep going until they get it. I found out that wasn’t my cup of tea, so I switched degrees.”

Now, two more months stand in the way of his degree.

Monday. Cauthen gets to campus around 8:30 a.m. for two classes.

Plus an online class.

With 17 credit hours, four to six doctor appointments a week and some volunteer hours at Halloween Express, Cauthen said it’s his hardest semester yet because of his recent diagnosis of MS, or multiple sclerosis, among other medical and neurological issues.

Neurological issues causes his left arm to only move a few inches and slurred speech. Some days he can’t even move, speak, eat, drink or swallow with no feeling on his entire left side of his body from the head down.

Heart issues where his heart rate can go from your average 60 beats per minute, or bpm, to 210 or 220 bpm for no reason at all can skyrocket his blood pressure from your average 130 over 80 to 170 over 102. It fluxuates causing him to pass out at times.

Chemotherapy for his testicular cancer had to be stopped because of his heart issues, but luckily his last set of three chemo treatments happened over the summer and he’s been in remission ever since.

“As of right now, I am an anomaly to the doctors,” Cauthen said. “When it comes to my neurological issues, they do all these tests that come back positive, but they can’t figure it out.” 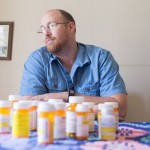 Every morning Cauthen takes seven pills to start his day. At lunch, he adds three more pills to the list. By bedtime, Cauthen takes another eight pills to finish off his daily medications.

Doctor appointments include injections in the spinal cord and muscles to help unlock them so he can walk, and speech therapy.

Pain medicine isn’t an option for Cauthen either.

“I refuse to take them,” Cauthen said. “I just deal with the constant pain. 24/7. If I take those, I’m non-coherent and I like to be in control of myself. When I take those, I have no control over me and I don’t like that feeling.”

His support system is great although it comes with frustrations.

“I’m trying to focus on my well-being now, but at the same time I find myself being aggressive vocally to them [his step sons] because I have that attitude of this isn’t their issue,” Cauthen said. “It’s my issue. I’m slowly learning it is their issue as well because whatever affects me affects them. That’s something we struggle with as a family.”

But when it comes down to it, his family is there for him.

“In times of need where I can’t walk or talk, they [his step sons] help out a lot,” Cauthen said.

We’re all here to learn

School brings out a new array of challenges for Cauthen.

A misconnection in his brain hinders the ability to go from paper to brain or vice versa. Writing becomes a struggle. Tests take longer to complete. Balancing classes with doctor appointments seems impossible.

“I’m thankful the professors are willing to work with me,” Cauthen said. “But at the same time, I don’t expect special treatment. I want to be treated just like the Average Joe. There should be no exceptions to that rule because we’re all here to learn. Just because I have some physical disabilities or mental disabilities right now, if I wasn’t capable of doing it, I wouldn’t have done it. Why treat me different if I’m here?”

So why do it? Why go back? Why continue at school when there are so many struggles?

“Honestly the reason why I’m back to school is because I needed to be goal-oriented,” Cauthen said. “There for a while I was very suicidal. I always felt like a failure. I needed to find an avenue, a positive avenue, to keep my mind off of it.” 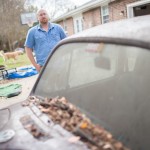 One of Cauthen’s aspirations
was to restore a Volkswagen Beetle for his son to drive during high school. In his current state of health, he can no longer work on the vehicle due to the pain throughout his body. Photo credit: Taylor Slifko

“I can’t do what I use to do,” Cauthen said. “I can’t play with the kids. I’m not able to do the stuff I used to do. My independency is gone. I felt worthless. Those thoughts just started going and I was very suicidal.”

A journey to self-reliance

Jackson gave him his independence back.

Three-fourths golden retriever and one-fourth lab, Jackson is the youngest assistant disability service dog for America’s VetDogs, a nonprofit organization, aging in at about 15 months old. 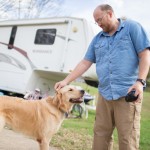 Each service dog costs about $65,000 and are provided at no cost to veterans or first responders, according to their organization’s website vetdogs.org.

Taking about a year’s time to complete the process, Cauthen started his application by releasing his medical records to the organization where a committee, including doctor experts, sat down to discuss which applicants need a service dog. From there, Cauthen had to fill out endless amounts of paperwork and send in a video to America’s VetDogs specifically describing exactly what he needed help with.

Many stipulations come with the organization. Jackson must maintain a certain weight under Cauthen’s care and must have 30 to 40 minutes of physical and mental stimulation a day to keep his skills sharp. Even though America’s VetDogs has legal ownership of Jackson, Cauthen will have custody of him until Cauthen is retired or the dog is retired. From there, Cauthen has the opportunity to adopt Jackson for good.

A service dog is taught four basic commands during their initial training: push, retrieve, tug and brace. After that, Jackson went through specific training to adhere to Cauthen’s needs: picking items up, turning the lights off, refrigerator work, kitchen work, going to get help when Cauthen passes out and PTSD work. 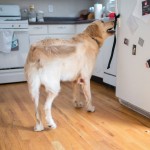 A black rope attached to the refrigerator helps service dog Jackson retrieve refreshments for Cauthen. This helps when Cauthen struggles to move or perform simple tasks such as getting something to drink. Photo credit: Taylor Slifko

And then, Jackson came home. 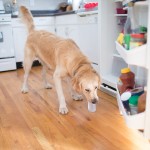 Cauthen typically only drinks water, juice or tea and Jackson knows the difference between all three. Same with a pot or a pan. Cauthen’s house is equipped for Jackson so when Cauthen says “water,” Jackson will go to the refrigerator, open it up with the straps placed on the machine, retrieve a water and bring it back to Cauthen. 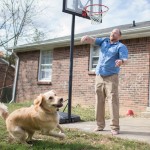 When the vest comes off, service dog Jackson transforms into a playful puppy bringing out the childishness in himself and Cauthen. Photo credit: Taylor Slifko

When the vest is on, Jackson is in service mode. But when it comes off, the puppy comes out. He rolls around. He jumps. He slobbers over things. He’s just your average puppy.

“When it’s play mode, the childishness in him kinda brings it out in me,” Cauthen said. “If you were to ask my wife now from when I got him, my attitude has changed.”

Outside of all the school and medicines and appointments and struggles, Cauthen finds joy in his life through his passions. From a lifelong passion of soccer where he began to play in Germany as a “wee, little lad,” to film photography to live theatre, Cauthen doesn’t forget to take joy in the little things because of his daily struggles.

Getting dressed. Showering. Sometimes eating. Walking. His mind. All the things we usually never think twice about. He struggles with daily.

Just two more months to go. He won’t give up now even though he wants to every single day.

“I’m afraid if I stop, I’ll end up being suicidal again,” Cauthen said.

After graduation, Cauthen has several options about his next chapter in life. Pass the PRAXIS test to become a high school teacher for communications. Buy an RV and just work campsite to campsite around the nation. Get a place down in the Caribbean and work hospitality. Use the rest of his GI Bill and take some photography classes. Get his Master’s degree. It all depends on his health. 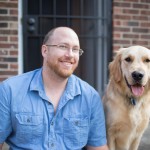 Even as an anomaly to the doctors, Cauthen remains optimistic about his health and future. Photo credit: Taylor Slifko

“Doctors are saying I could be bed-ridden within the next six years,” Cauthen said. “But, I’m optimistic and strong-headed so I’m fighting it to the tee. I enjoy life. I like making people smile. I love getting reactions out of people. I love learning. So, I force myself to keep going.”

People walk by you everyday. Each with a story to tell. All those people. All those voices. All those stories. Just listen. 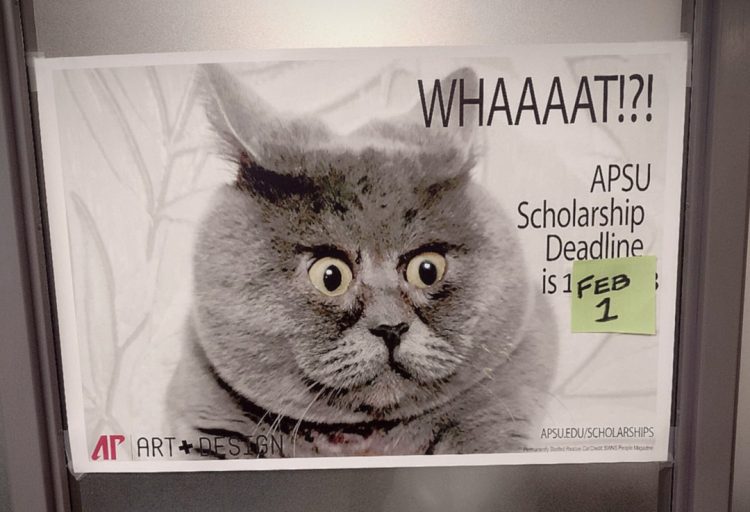 How to find and secure free money for college