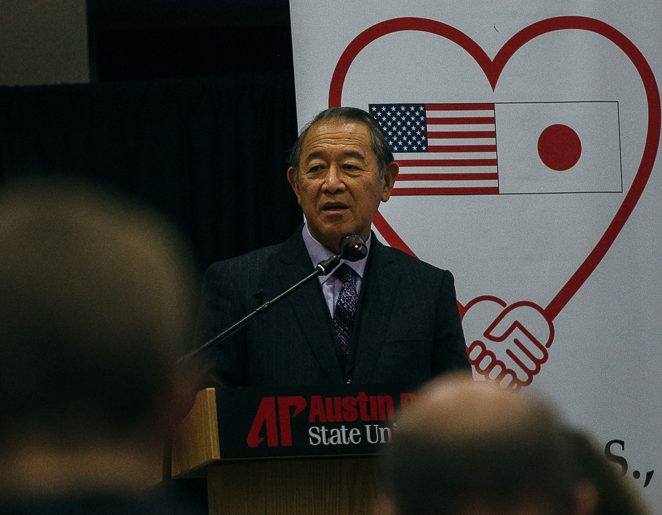 “I wanted them to get interested in Japan/U.S. relations,” Ambassador Fujisaki said. “Second, I wanted them to know not only about Japan, but China, North Korea, and U.S. foreign policy and international relations. Because I think that’s important for students, to know about the world, and if it could be a little clue to that, I think that was one of the intentions.”

Ambassador Fujisaki began the presentation by walking the group present through a six question quiz, meant to prime them for all the interesting things there were to learn.

Xiaoyan Liu spoke next, speaking of her time studying abroad in multiple countries. Not being Japanese or American, she was in a unique position to explain her views on each.

She spoke about increasing possible scholarship opportunities and the benefits of studying or working in Japan.

“We are trying to internationalize, globalize now,” Ambassador Fujisaki said. “English language education is behind. We’d like to have young Americans come over and become English language teachers.”

After Liu spoke, Hayato Sawa shared his experiences as a university student intending to join a major newspaper company in Japan next April.

Asako Kato followed him, speaking of the way opportunities in Japan are shifting for women, who formerly had not been a large part of the work force.

There was a large focus on Americans interested in study abroad opportunities.

“I think it went really well, there was a really great turnout from both people in the community and students at our school,” senior accounting major McKenzie Mullins said.

“Hopefully it will inspire more students to want to study abroad and experience other cultures whether it’s in Japan or other places in Asia, places that are really different from here in America.”

After the presentations and a Q & A session, students were given a buffet of food and a chance to interact with the presenters.

“Try to think what you would like to do in your life. What would you like to become? What would you like to do? Don’t wait till senior year, and then try to think about it,” Fujisaki said. “Don’t think about next week. Don’t think about next month… One thing everyone has in common is, everyone has his or her lifetime, never can return, and it just ends. So you have to think beforehand that you would like to do things in your one lifetime, so you won’t regret it, or think ‘hey, I wanted to do that, but I’m stuck here.’”