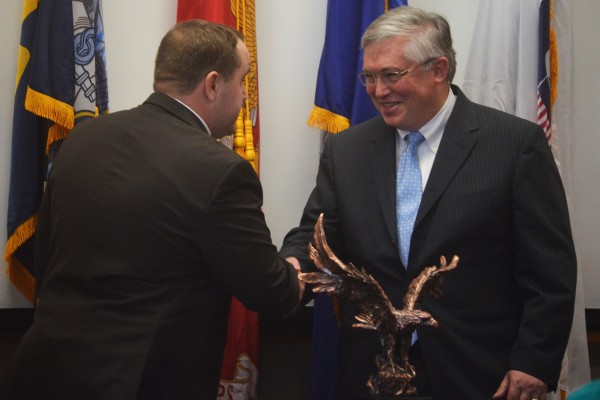 As the wars in Iraq and Afghanistan wind down, thousands of soldiers will be taking advantage of their educational benefits in the coming years. Universities across America will have to prepare for the influx of student veterans with complicated financial aid from their GI Bills.

Keith Messer, a student veteran, thinks APSU has prepared him well, and APSU receiving this award confirmed his feelings.

Veterans at APSU have access to early registration for classes, staff to assist with financial aid, training seminars and assistance in transitioning from military into civilian collegiate life and beyond. They are served by staff in the Military Student Center, the office of Veteran Affairs, the Student Veteran Organization and the Military Task Force.

President Tim Hall, faculty and staff from the Student Veterans Organization and the Military Student Center and student veterans attended the presentation of the award.

Messer was thrilled with APSU’s performance in serving its veterans.

“I’m so happy with the university,” Messer said. “They really stepped up.” Messer was particularly appreciative of the way APSU has provided dedicated staff to assist with military education benefits, which he explained can be very different from traditional aid.

The president of the Student Veterans Organization, junior Michael Cleveland, presented the award to the university with a brief speech. He congratulated the school on its excellence and its recognition that APSU has a part to play in serving the military. President Tim Hall emphasized that point further.

“They deserve the utmost of our service,” Hall said and praised the student veterans who model discipline for their fellow students. He also discussed the university’s Military Task Force, created to bring university resources to enhance veterans’ educational experience.

The national Student Veterans Association took notice of press releases in Tennessee and beyond regarding APSU’s work with veterans and told the APSU chapter of the association to give APSU recognition on their behalf.

Cleveland, the SVO president, sees APSU as a leader in veteran assistance in higher education and one key to the success of the school is their adoption of military customs. According to Cleveland, the student veterans are excited about the coin ceremony where they receive a military coin for graduation, paying homage to military tradition.