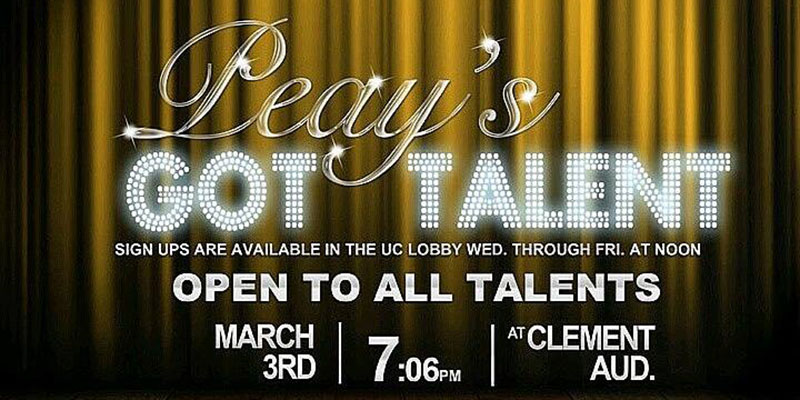 On Tuesday, March 3, students gathered in the Clement Auditorium to cheer for their favorite acts in the APSU talent show, hosted by Alpha Phi Alpha Fraternity and Spoken Peayce. Acts ranged from slam poetry to breakdancing, but it was an original song composed by Elizabeth Patterson that won over both the crowd and the judges panel.

“It feels pretty great [to win],” Patterson said. “I saw there was a talent show on campus, so I signed up because they’re fun. I’ve never won a talent show before.”

Patterson’s winning performance was her song “Fight for My Right,” which highlights struggles facing the LGBT community. “I created this song because I feel like there is a lack of caring and compassion in people nowadays, and when it comes to equality, everyone deserves it.” When asked how she plans on spending the $100 first place prize money, Patterson said, “I think [my girlfriend and I] are going on spring break now.”

All 19 acts in the talent show were scored by a panel composed of students and staff. Each act was given a score from 1 to 10 based on preparation, stage presence, quality, appearance and overall entertainment value.

“We received some really great reviews from the show, so this will definitely become an annual event,” said Tau Phi Chapter President Andrew Montgomery. “Everything went smoothly as far as logistics, but we will definitely try to get the Clement [Auditorium] to full capacity next year.”

Spoken Peayce — an emerging APSU organization that helps connect students through a shared love of poetry — also had a hand in organizing the show. Members of the organization presented their poetry throughout the night, with Spoken Peayce member Kayla Suttles winning second place in the competition.

“I thought this would be a great opportunity to help another organization get its feet off of the ground,” Montgomery said. “It was a pleasure to work with them, and I wish them the best of luck. It was a warm feeling knowing we were able to get talents from various people and student organizations on campus. This was an amazing event, and we look forward to working with Spoken Peayce in the near future.”