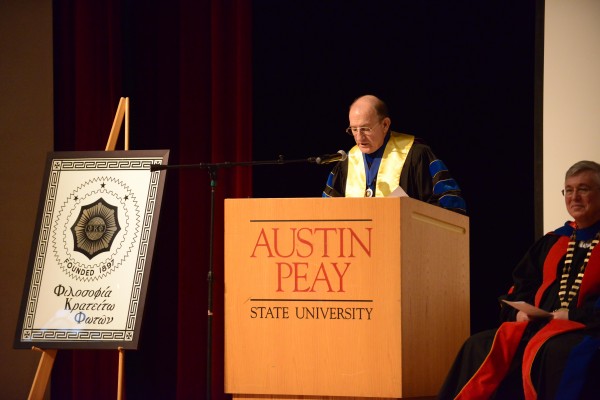 APSU Alumni Dr. Tim Barrowman and Dr. Phil Roe were inducted into the PKP Chapter 191 Academic Hall of Fame. In addition, 116 APSU upperclassman and graduate students and 6 faculty members were introduced into PKP.

Phi Kappa Phi is the oldest, largest and most selective honor society in the nation, according to Phi Kappa Phi’s website. The mission of the society is “to recognize and promote academic excellence in all fields of higher education and to engage the community of scholars in service to others.”

“In 1997, our chapter of the honor society of Phi Kappa Phi established the Academic Hall of Fame as a part of this society’s centennial celebrations,” said Karen Sorenson, past president of APSU’s PKP chapter. “Since that time, we have inducted 36 outstanding graduates of APSU. Candidates chosen for induction are alumni who have distinguished themselves professionally and who have made notable contributions to society and to humanity.”

As a part of being inducted into the PKP Academic Hall of Fame, Barrowman (1971) and Congressman Roe (1967), representative for Tennessee’s 1st Congressional District in the U.S. House of Representatives, were added to a PKP Hall of Fame plaque that is displayed in the APSU Woodward Library. Neither Hall of Fame inductee was present at the ceremony; however, both Barrowman and Roe sent in statements expressing their honor and gratitude.

Dewey Browder, president of PKP, Chapter 191, read Barrowman’s statement for the audience. Barrowman expressed his thanks and shared the history of his “love for learning.” Barrowman stated that his love first began when his father convinced him to do a science project and enter the project into the science fair held at APSU. Barrowman ended up winning a ribbon for his project—from there, his love for science only grew.

“My love for learning later carried me through APSU with a major in chemistry and a minor in biology,” wrote Barrowman, “The professors in the science department were very encouraging. To further my learning, I chose to go to medical school and was accepted at the University of Tennessee, Memphis. As you can imagine, one must have [a] great love for learning to get through medical school.”

Barrowman has had a notable impact on the medicine world and is currently a pathologist and hospital laboratory medical director at Baptist Medical Center East in Montgomery, Ala.

Roe’s statement was also read at the ceremony. Roe emphasized his thanks for the honor and said he felt privileged to be noted among such distinguished alumni in the PKP Academic Hall of Fame. Roe admitted that, although he gained a love for reading from an encouraging family, he was not always the best student. “Fortunately the faculty worked with me anyway and further instilled a love of learning that would set me on a path for medical school, military service, 30 years of medical practice, and elected office,” Roe wrote.

Roe added, “It was because of APSU and supportive family that the son of a factory worker was able to rise up and gain a better life for himself.”