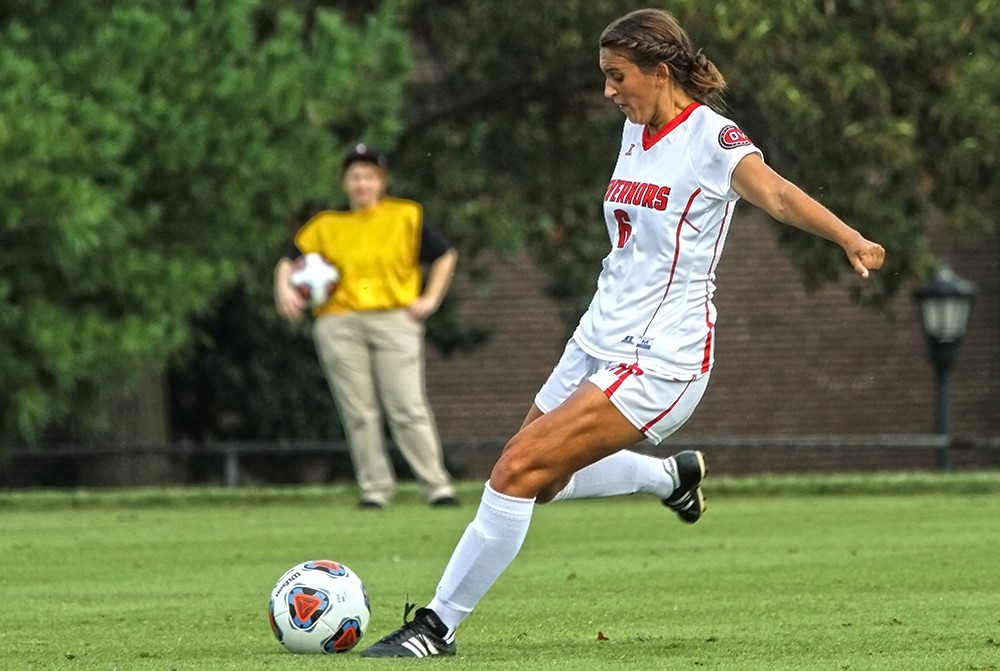 APSU coach Kelley Guth has been in charge of the Lady Govs soccer program since it began in 2002, and  won her 100th game as a coach on Friday, Aug. 19. Guth reached the three-digit milestone in Birmingham as the Lady Govs defeated the University of Alabama at Birmingham Blazers 2-1. Guth is the second coach in Ohio Valley Conference to reach 100 wins, following Southeast Missouri’s Heather Nelson.

“It’s very rewarding,” Guth said. “Just thinking back from where we were in 2002 when I started the program, to where we are now, I’m very proud to be here at APSU.”

The season’s opening goal came off of senior Nicole Wojcik’s one-timed shot, assisted by redshirt freshman Pamela Penaloza of Bogota, Colombia. The play was set up as senior Gina Fabbro played out wide to Penaloza, who then danced inside and fed Wojcik. Wojcik slipped the ball underneath UAB’s Kelsey Daughtrey to bag her third career goal against the green and gold Blazers out of Birmingham and eighth in APSU’s red and white.

The Blazers didn’t take long to respond as sophomore Caroline Keherer tapped Katherine Foster’s corner kick around keeper Lindsey Todd and into the back of the net knotting the game up at 1-1.

However, APSU junior Kristin Robertson would find the game winner minutes before the end of the opening 45 minutes. Robertson took a loose ball to the edge of the box and blasted it in to the corner pocket of the net, putting the Lady Govs up in a decisive 2-1 lead. Robertson lead APSU in four shots on the day.

Freshman Mary Parker Powell would tend APSU’s net for the final 45 minutes. Powell earned two saves in her first appearance as she and the defensive shape above her outlasted a furious UAB attack.

“I was very pleased with our work ethic tonight,” Guth said. “In the first half, I thought our possession was very good, and we controlled the game. I thought the girls were very resilient in the second half. We played a couple different systems tonight, and I think they’re starting to show signs of a mature group that can handle adversity and pressure.”