The Lady Govs’ soccer team finished an extraordinary season this past weekend, falling in the Ohio Valley Conference tournament championship to tournament favorite, UT-Martin in the championship game.

The loss, though heartbreaking, concluded a season for APSU that saw the team reach their second championship game while riding a winning streak unmatched by most teams.

On Friday, Nov. 2, the Lady Govs would take on SIU Edwardsville in the second round of the tournament held in Martin, Tenn. The team was able to ride an eight game unbeaten streak into the tournament to help them secure the second seed and a first-round bye.

The Lady Govs would continue their impressive streak, as they were able to defeat SIUE, 1-0, in another impressive shut-out win, their seventh on the season.

When the two teams faced earlier in the season, it ended in a 0-0 draw after two overtimes, both teams’ only tie on the season. This game would feature much of the same, but a late APSU goal would be the deciding factor.

Although APSU would come out on top, it took a big contribution from junior goalkeeper, Haylee Shoaff.

SIUE would outshoot APSU in the match and Shoaff would need to make more saves than her opposing SIUE goalkeeper to secure the win, but she rose to the occasion. Shoaff had six saves on the night, three in each half.

The Lady Govs would finally break over 200 minutes of scoreless soccer between the two teams on the season in the 84th minute.

Junior Tatiana Ariza would cross the ball into the box, deflect it off an SIUE defender and find an open Joceline Quiceno, who was able to slide in and net the goal. Ariza’s assist was her eighth on the season, top in APSU history for a single season.

In the championship game, the Lady Govs’ impressive nine game unbeaten streak would come to an end, as they would fall to UT-Martin, 2-0. It was APSU’s first loss since that last time it played UT-Martin on Sept. 28 on the exact same field.

Both teams played strong defense for the majority of the game, as they both remained scoreless at the intermission.

After a few close calls by both teams, UT-Martin would put the first goal on the board in the 72nd minute on an impressive header on a free kick.

Nine minutes later, the Skyhawks would net another goal, all but letting the wind out of the sails of the Lady Govs. APSU would push hard the remainder of the game, but were unable to score. UT-Martin’s goalkeeper, Mariah Klenke, finished with five saves for the Skyhawks.

Although APSU would fall short in the title game for the second time in three seasons, the team’s success was impressive. The team finished 12-8-1 on the season, going 8-3-1 in OVC play.

Tatiana Ariza was also named the OVC offensive player of the year, the first in APSU history, adding to her impressive resume.
The team will lose six seniors, but coach Kelly Guth will have a lot of talent coming back next year. 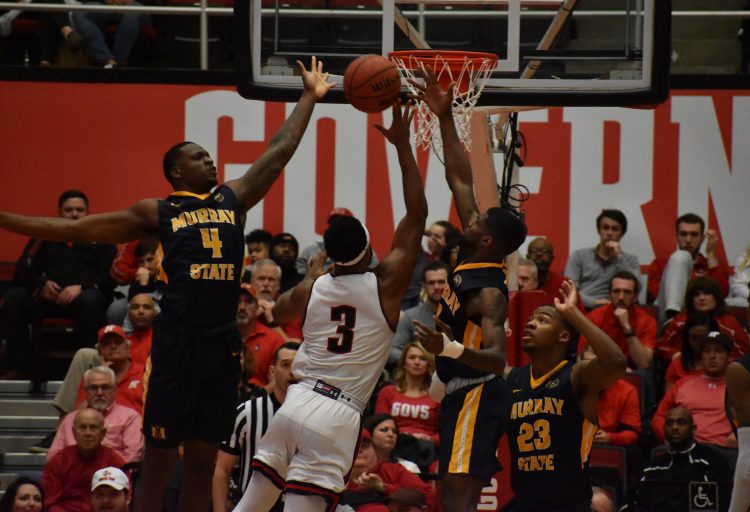