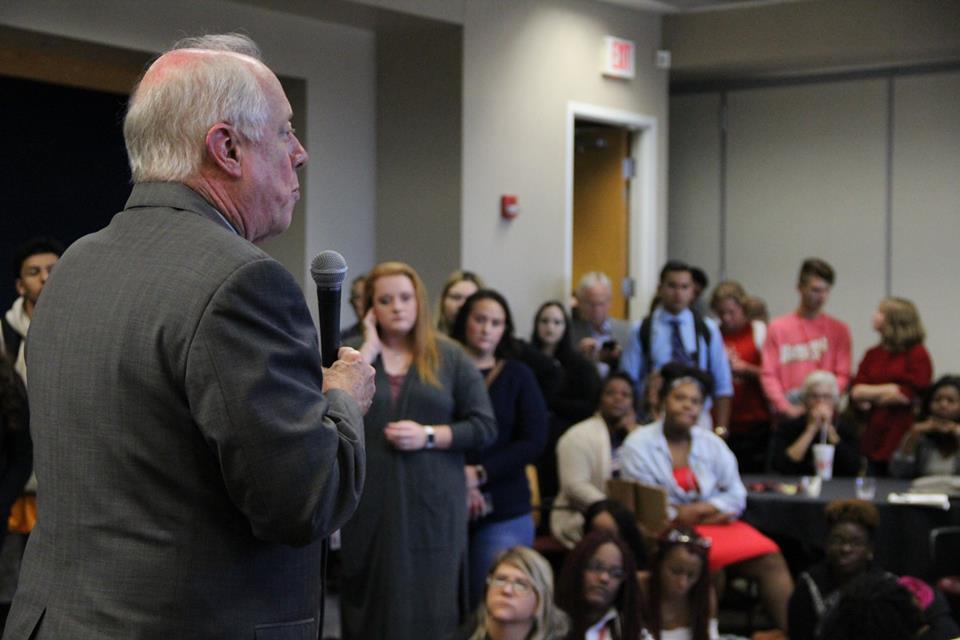 Students were pleasantly surprised when Tennessee’s Democratic Senate candidate and former Gov. Phil Bredesen made a visit to APSU.

The College Democrats sponsored a meet and greet with Bredesen which occurred in MUC 305 on Tuesday, Oct. 23.

Bredesen’s appearance follows his year-long campaign from his Dec. 6, 2017 announcement that he was running for Senate.

Seanna Macri, a freshman at APSU, explained why she wanted to participate in the event.

“I hope to gain perspective of a different viewpoint, and kind of some clarity because things are so one-sided or two-sided. I’m hoping there can be some middle ground,” Macri said. “Before I vote, I’d like to see who has the best middle ground because I think that that’s what Tennessee needs, rather than one side versus a different side.”

Students were offered the chance to ask Bredesen questions on a number of issues including foreign relations and many other hot topics.

According to Bredesen, with America fulfilling a leadership position the world has become a better place.

“It bothers me that we seem to be pulling back from that now,” Bredesen said.

He reminded the audience that the relationship is “special” and that Canadians and Americans have much in common.

In relation to his campaign for Senate Bredesen said, “I would like to be one of those voices in the Senate to argue for establish[ing] these relationships: cultural relationships and trade relationships, to appreciate the different places in the world and the ways in which we can benefit each other.”

Bredesen pulled from his time as governor when he sent groups of people to participate in culturally impactful visits to Japan and China as well as other countries.

“I really value those trips and I certainly have every intention, as Senator, of continuing to try and be an ambassador of our country in that informal sense,” Bredesen said.

The Senate seat he refers to will be determined by an upcoming election on Nov. 6.

Bredesen and Republican candidate Marsha Blackburn are the leading contenders.

A Vanderbilt University poll published Oct. 18, declared the election to be a toss-up with the candidates separated by a statistically insignificant 1 percentage point among registered voters.

Bredesen has handled many interesting environmental issues as both mayor of Nashville and governor of Tennessee, with a focus on conservation.

“I recruited the Titans to come to Nashville. I have no idea whether a hundred years from now football is going to be a sport in the United States or not, but I guarantee you there’s going to be families down in Shelby Bottoms, walking along there and enjoying the river. So, it gives you a real pleasure in terms of working for those longer things,” Bredesen said.

Bredesen found conservation something that he could get bipartisan support.

“[For some people] this is an area that is important ecologically and it’s about species preservation. For others, it was about I’ve got kids and grandkids and I want to make sure they’ve got a place to hunt deer when the time comes,” Bredesen said.

Bipartisanship was a topic that was reoccurring during the discussion Tuesday.

The Pew Research Center found last year for the first time that the gap between Republicans and Democrats dwarfed gaps between people of different races, genders, religions and education levels.

AN IMPORTANT ISSUE IN AMERICA

Bredesen stressed the issue of division along party lines.

“You’re never going to get on solving any of these healthcare issues or immigration issues, as long as you‘re stuck in this mode of heightened partisanship,” Bredesen said.

If he won the Senate seat, the one thing he’d want to do is to find some way back from this very divided country America has become.

“There’s nothing I feel more strongly about,” Bredesen said.

The issue of partisanship is one of many issues facing Americans today and worries seem to abound.

Yonette Billingsly was one of the many who attended the discussion, along with her 16-year-old daughter Cyan Billingsly.

As Yonette introduced herself she said, “I am the daughter of senior citizen parents. My husband is a veteran as well,”  Billingsly said. “We have a child who was really ill a few years ago. So, my worries are plenty, and these days they just mount and they don’t seem to be quelling at all.”

“[My daughter and I] were watching a show one night and one of your commercials came on. My daughter hopped out of the bed, she said, ‘Momma, let’s go vote for him now’,” Billingsly said.

Billingsly’s voice spoke for many who are concerned about the state of America today.

“I just wanted to let you know that though our concerns are plenty. You encourage my little one. You have our vote and I hope that the decency continues,” Billingsly said.

Her daughter commented on the aforementioned commercial. “It was real,” she said. “It wasn’t rehearsed.”

These campaign commercials are not unique to Bredesen, as his opponent Marsha Blackburn also released various similar ads.

What Bredesen believes set his apart, however, are that “for the first time in [his] history, all of those are written by [him].”

Bredesen knows his commercials might be more awkward than the standard industry commercials created by a professional.

However, he believes they have more appeal overall because he as an individual is speaking.

In his campaign video titled “Why I’m Running” Bredesen discussed what he viewed as the most pressing issues today and mentioned, among others, healthcare.

NBC News and the Wall Street Journal found that healthcare was the No. 1 issue in a poll of potential voters in June 2018.

A Gallup poll from June 2017 previously found that healthcare was the No. 2 issue.

While governor, Bredesen tackled health care in the private sector and dealt with TennCare issues.

TennCare is the state of Tennessee’s Medicaid program that provides health care for approximately 1.4 million Tennesseans.

“I hear a lot about health care related issues, and in more rural parts of the state it’s around access, there’s hospitals closing, difficulty getting doctors to locate there,” Bredesen said. “In a more suburban or urban part of the state, it tends to be about cost, cost of drugs, cost of insurance.”

When discussing other important issues, Bredesen was quick to make the distinction between the issues younger voters, like many of the students in attendance, were focused on, as opposed to other demographics.

With the knowledge that he was speaking to a younger audience, Bredesen touched on topics like net neutrality and student loans.

“The usual questions about healthcare and stuff are the ones that usually come up with people 15 years down the line,” Bredesen said.

Bredesen still maintained his ability to connect with younger voters joking, “Remember, Bernie Sanders, is older than I am.”

He also warned younger voters from being lured in by “the flashiest, youngest politicians out there” saying, “There’s a lot more to making it work than looking good on the stump or giving a good speech.”

POWERS OF THE PRESIDENT

Later, a retired math teacher asked, “Did I go to sleep for maybe 18 or 20 years when they gave all the power to the president of the United States?”

“You didn’t go to sleep, but the House and the Senate did,” Bredesen said.

“The thing that amazes me more than anything else,” he said, “is the extent to which members of the Congress think of themselves as foot soldiers for the President.”

Bredesen believes that Congress needs to seize back some of their power and maintain responsibility.

With regard to the rights of minorities and those in the LGBTQ community, one student questioned where Bredesen would “meet in the middle” and where he would “stand for the people of Tennessee.”

Bredesen reassured students that the protection of the rights of minorities has always been important to him and that they could count on him as being steady on that.

“One ought to be respectful and not try to force people into your vision of what the good life is,” Bredesen said.

In the vein of the LGBTQ, a separate student asked about Bredesen’s stance on transgender rights.

Bredesen wishes to protect the rights of transgender individuals with the caveat that he would like to see what the specific legislation is and whether it actually helps to address the issue.

“Again as I said, there’s a lot of different ways to live your life, and we need to be respectful of them,” Bredesen said.

One poll from NBC News and the Wall Street Journal published July 2018 found that 71 percent of American voters believed Roe v. Wade (1973), which established a woman’s legal right to an abortion, should not be overturned.

Just 23 percent said the ruling should be reversed. It was the highest level of support seen in the poll’s history, dating back to 2005.

A Gallup poll from 1989 showed 58 percent said they believed Roe v. Wade should stay in place while 31 percent disagreed.

Professor Jane Wessel asked Bredesen where he stood on the issue.

“I have always supported reproductive rights,” Bredesen said, “I think that an abortion would have to be one of the most difficult decisions a woman could handle. I believe that decision is much more safely held with that woman and her family and her God than it is with politicians and Washington.”

Phil Bredesen grew up in upstate New York before moving to Nashville, Tennessee where he would become mayor from 1991-1999.

During his second term as governor Bredesen was elected with a majority in every Tennesseean county. 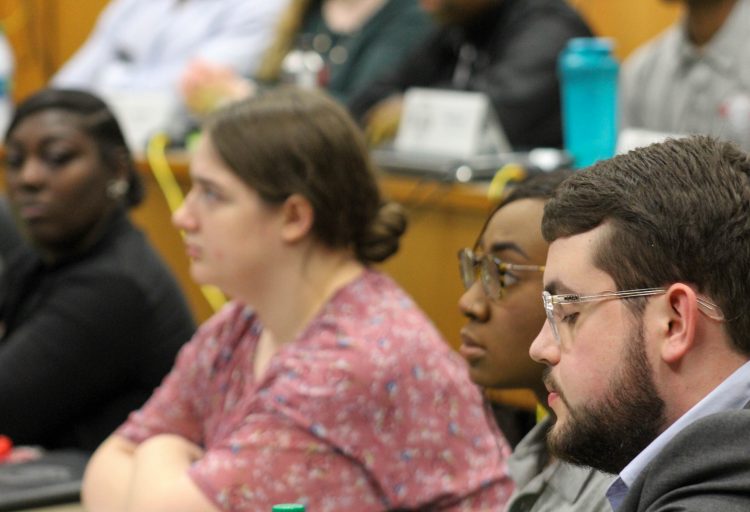