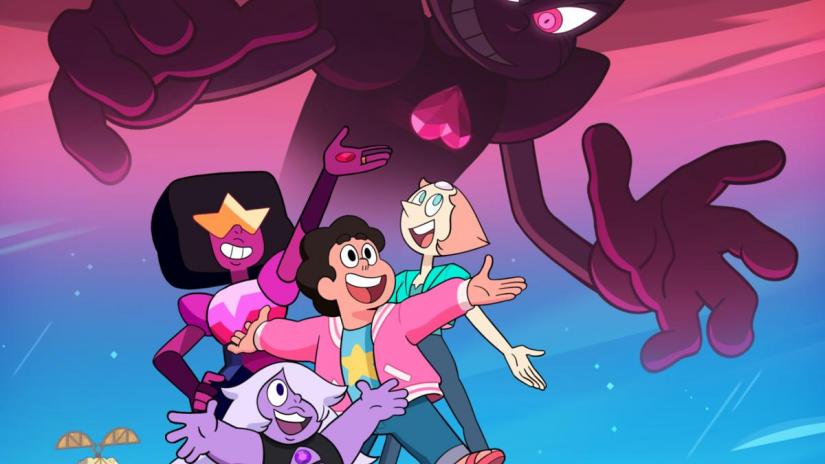 “Steven Universe: The Movie” is a glittering spectacle of storytelling.

“Steven Universe” is an animated fantasy-action show created by Rebecca Sugar. She was initially a writer and storyboard artist for “Adventure Time,” and she is the first woman at Cartoon Network to create her own show.

The show chronicles Steven Universe and his adventures with a group of intergalactic warriors, the Crystal Gems (Garnet, Amethyst and Pearl). Throughout the seasons, Steven has uncovered bits and pieces of his mother’s backstory and legacy. From battling Homeworld Gems to struggling with his sense of self, Steven manages to come out on top each time.

Watch the trailer for Steven Universe: The Movie below.

Two years after the events of the Season 5 finale “Change Your Mind,” Steven and the Crystal Gems usher a new era of peace for all humans and Gems. After years of reforming Homeworld and dismantling the Diamonds’ colonial dictatorship, the Gems are in desperate need of a vacation. However, when an unexpected figure from Pink Diamond’s past resurfaces with the intent on destroying the Earth, it is up to Steven to protect his home from this new villain and save his happily ever after.

Spinel is an excellent villain. Her character design is heavily reminiscent of the video game “Cuphead.” From her rubber-hose style of animation to her electric swing song “Other Friends,” she lights up the room every time she is on-screen. Not only that, but her backstory is appropriately tragic. It makes her a character you want to be redeemed, which is a difficult feat to achieve.

Some of the characters do not have as large a role as one would hope. The secondary Crystal Gems (Bismuth, Peridot and Lapis Lazuli) only appear when it is convenient for the story. The Diamonds also have a diminutive role in the film, but this is appropriate given their relation to the story and the villain’s motivation.

The songs, as to be expected, are phenomenal. Zach Callison’s singing has improved since the first episode of the series, especially since he can now sing in his normal register. The visuals complement each musical number, and the composition of each song is wonderfully melodious. Stand-out songs are “Happily Ever After,” “Drift Away,” and “True Kinda Love.”

If there was one problem with the movie, it is that the stakes do not feel as high as they should. The movie operates like an extended episode of the series rather than something deserving of a feature-length television movie. While it makes for a nice continuation after what should have been the series finale, there are other episodes that more strongly capture the drama of the characters’ plight than the movie.

The film marks a hopeful period for the series. Despite achieving the perfect ending for the show, Steven Universe shows that it is willing to grow just like its eponymous main character. With excellent animation, melodious songs and well-written characterization, “Steven Universe: The Movie” proves that happily ever after never truly ends.