Baseball fans have been anxiously waiting for a break-out game from the young APSU offense. There have been flashes of offensive output this season, but none like the display the Govs put on against the Dayton Flyers.

The Govs defeated the Flyers 8-5 in the first day of the Riverview Inn Classic at Raymond C. Hand Park. APSU racked up 15 hits on the afternoon, four of which were home runs, which set the tone early in the game. Maybe it was the 50 degree temperatures, or the fact the younger players have settled in. But regardless of the reason behind the offensive showcase, the demeanor of the team has turned a corner in the right direction.

“I think we were much more confident today going into the game no question about it,” head coach Gary McClure said. “We were much more relaxed, and there was a whole different feeling down there. They’ve been making it too hard on themselves and you just can’t do that in this game. It’s hard enough already.”

The third inning sparked the Govs, scoring four runs. A lead off single by Rolando Gautier put a runner on, and freshman Garrett Copeland brought him home with a two-run homer to right field. Copeland had previously attempted to bunt Gautier into scoring position, but after not getting it down to go along with a wild pitch, Copeland belted the 3-2 pitch over the fence for his first home run of his collegiate career. Known as being a clutch bunter this season, he is hoping that the opposing team don’t pick up on the power he has when connecting.

“I noticed it brings in the outfielders when I started bunting, so now hopefully I don’t push them too far back,” Copeland said with a laugh. “I kind of like them close so I can poke it over their heads.”

Just two batters later, Ridge Smith hit the first homer of his career, also a two-run shot, which gave the Govs a 4-0 advantage. Smith has been the top hitter for the Govs this season, but Copeland will have bragging rights as being the first of the two to hit a home run.

After a scoreless fourth, the Flyers answered with three runs in the fifth and one in the sixth to tie the game. Three of them were earned runs and charged to senior starter Ryan Quick, who picked up his first win of the season. It appeared the right-hander would not factor into the decision, but the Govs came back in the bottom half to regain the lead.

Gautier, who went 3-for-5, doubled to bring up Copeland. With two outs, Copeland found a gap in right center to bring home Gautier and give the bullpen an opportunity to close it out.

A.J. Gaura relieved Quick, and got out of a crucial spot that McClure said was the game changer. Dayton put runners on second and third in the top of the seventh with one out, but Gaura worked out of the jam. To return the favor, the offense gave the relief pitchers a gift by putting three more runs on the board.

With Dre Gleason on first base, senior catcher P.J. Torres hit his second homer of the season, which landed beyond the fence in left center. After seeing his fellow teammates spray the ball beyond each part of the outfield wall, Logan Gray made his first home run in a Govs uniform a memorable one in a different way. The freshman hit a sinking line drive to center field where Alex Harris couldn’t handle it. The ball trickled all the way to the fence, and Gray was waved 360 feet around the bases for a rare inside the park home run.

“I saw him miss it so I just automatically rounded the bags. I was running as fast as I could to see what base I could get to,” Gray explained. “I knew for sure I was getting to third, but to be honest Coach Mac signaled me home later than I thought. I didn’t hesitate or slow down, but I didn’t expect him to do that. When I went home and slid as they missed the ball I was hyped.”

Jake Corum came on to pitch the final two innings, allowing just two hits and one run to continue his solid relief efforts.

The Govs will take the diamond again on Saturday, March 1 at 6:00 p.m. to take on the Bradley Braves. 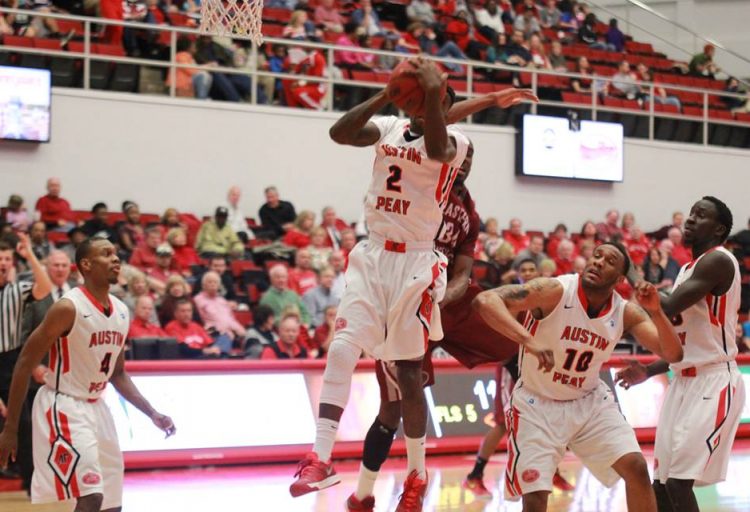