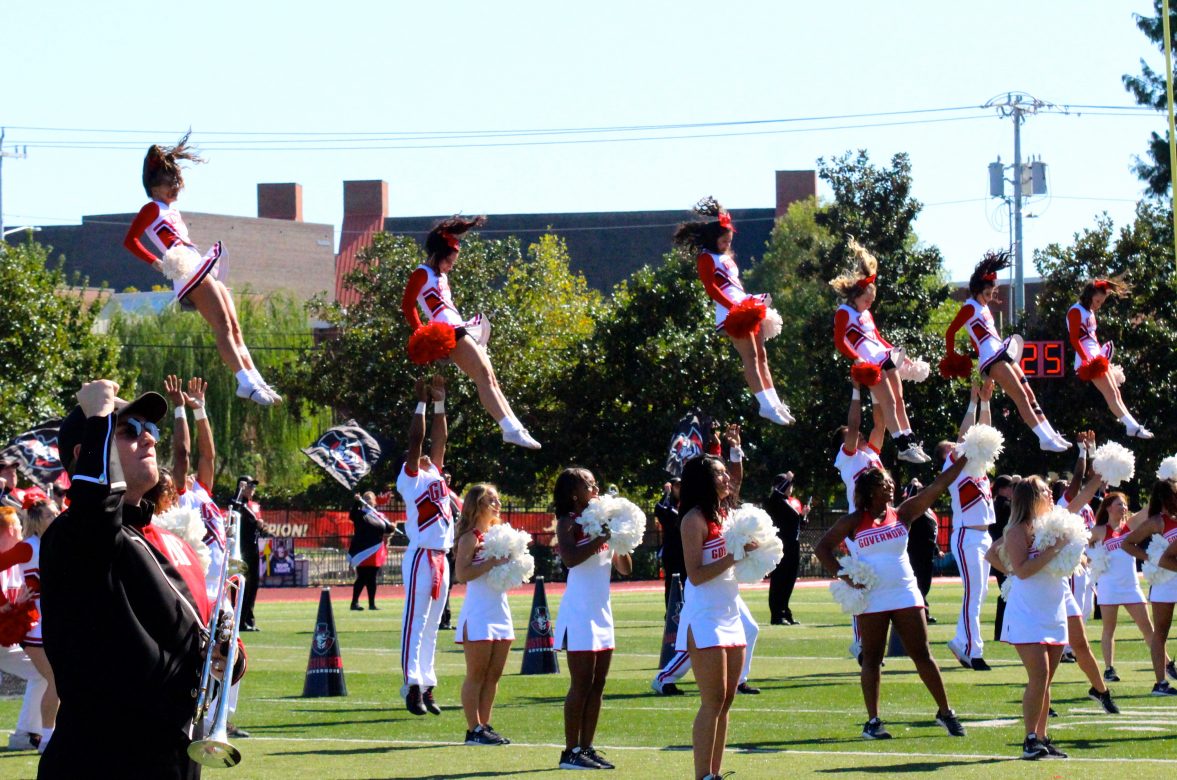 Fall Break started with a victory for GOVS football Saturday Oct.12th. In an exciting fourth quarter where six touchdowns were scored back and forth, the South East Missouri Redhawks managed 24 points to lose to the APSU Governors, who scrummed for 28 hard earned points.

Defense on both sides of the ball was grueling and sometimes over the top. Both teams received two “Unsportsmanlike Contact” calls and a Redhawk was ejected from the game.

JaVaughn Craig , who has been playing tough since the Govs starting QB Jeremiah Oatsvall was sidelined due to injury, took a scary hit in the second quarter, but returned back to the game to keep the offense rolling.

Craig threw for 248 yards, completing 17 of 28 attempts — two for touchdowns. He also added 38 yards on the ground, his longest rush was for 14 yards and a critical first down.

SEMO brought a rowdy Redhawk contingent from Cape Girardeau, MO, with a band and bleachers full of fans. Their team executed their game as best as they could against a flint-nosed Governor defense that would not hardly give them a first down. That is, until all hell broke loose in the home stretch.

The momentum changing defensive play of the game was delivered at the beginning of the fourth quarter when defensive back Trent Taylor picked off the Redhawks quarterback Daniel Santacaterina. With the game tight and the SEMO fans acting like they were at home (dancing and hollering and making big brass band music), this crucial turnover set the tempo for the Govs for the rest of the game.

The officials played a big role in the game, calling back plays for yardage and raising the blood pressure of both coaching staffs. At one point in the fourth quarter, the normally mellow Governor fans were on their feet booing and hissing a call made against the Govs as they were defending in the Red Zone. It was a heated game on a coolish afternoon, to say the least.

The Governors were able to sew up the victory with a little under three minutes left on the clock. The defense held on a fourth down and long, taking the ball back and letting Craig run out the clock.

There was also something for the history books. A young man named John Austin Peay was the contestant in the Punt, Pass and Kick Challenge that Barnes and Noble sponsors every game.

While it is usually a good gag for some laughs, this young man effortlessly tossed the ball fifty yards, punted it another forty-five or so and then smartly chipped a field goal through the uprights, all in less than two minutes. To everyone’s surprise, Peay won the the legendary $250 gift certificate. Wonders never cease to amaze.