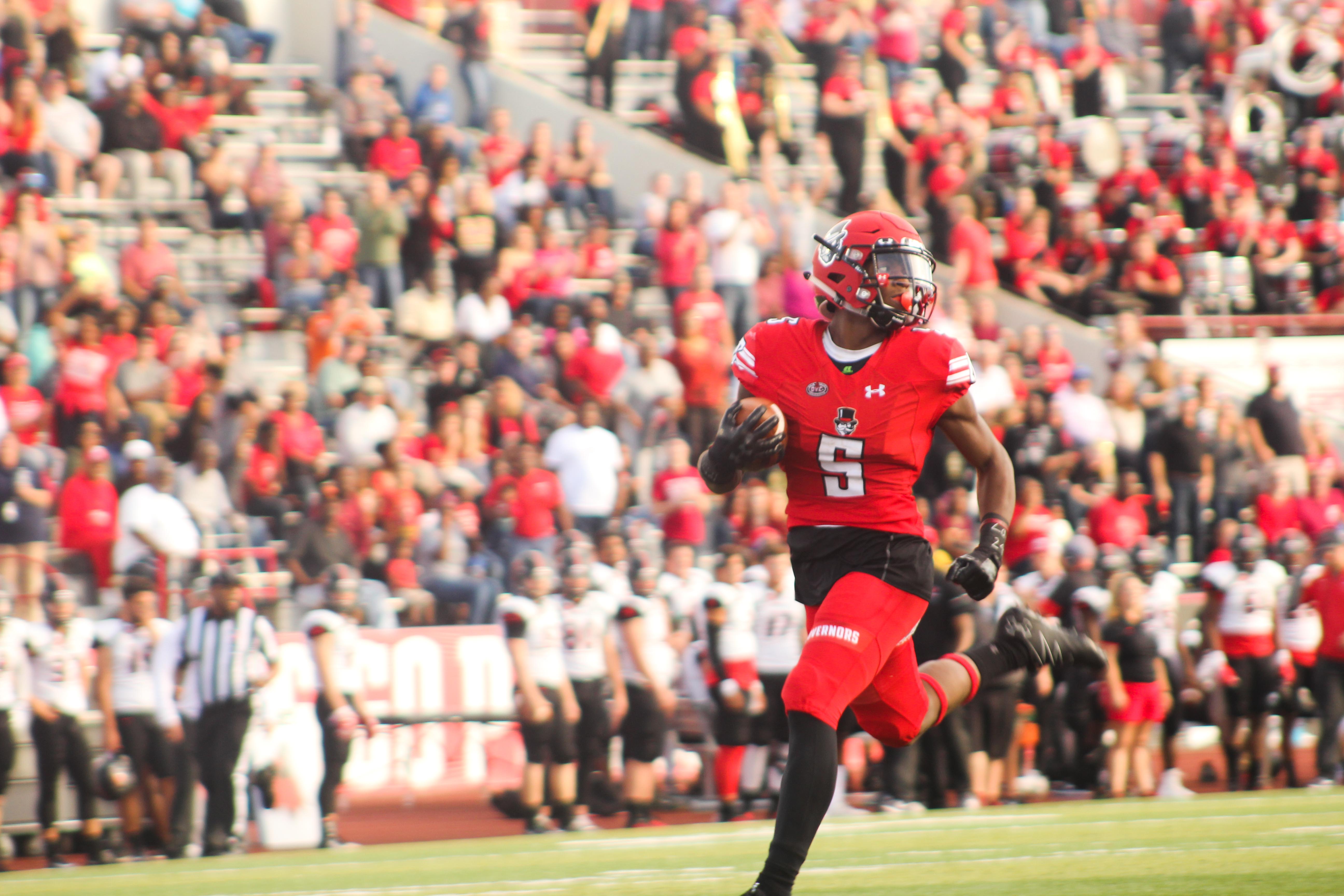 The year of firsts for APSU football continued Saturday, Oct. 21, as the Govs won their first homecoming game since 2008, defeating the Southeastern Missouri State Redhawks 38-31 on Saturday, Oct. 21.

The afternoon started off quickly for the Govs, ending the Redhawks’ first possession by blocking their punt.

The next drive yielded no points due to a missed field goal by APSU’s Logan Birchfield from the SEMO 31-yard line.

The Redhawks went three-and-out on their second possession. APSU took advantage immediately, finding the end zone on the second play of the drive. Jeremiah Oatsvall, a true freshman receiving his first career start, found Daryl Rollins-Davis on a 52-yard bomb.

The drive lasted two plays and went for 65 yards.

The Redhawks came right back with a scoring drive of their own tying the game at 7-7 after a 69-yard drive. The drive ended with a sneak by quarterback Jesse Hosket.

Kentel Williams and the Govs responded right back, as the sophomore running back found the end zone on a career-long 74-yard touchdown run. the Govs led 14-7 at the end of the first. The score was William’s second rushing touchdown of the year.

In the second quarter, the Govs extended their lead to 21 to 7 when Oatsvall found DJ Montgomery on a 10-yard connection. The Brentwood Academy product produced his first multiple passing touchdown game in an APSU uniform.

As the second quarter came to a close APSU punched the ball in one last time on an Ahmaad Tanner one-yard rush, extending the lead to 28-7.

The Govs pushed the lead further to 35 to 7 when Oatsvall’s 16-yard scamper worked out for six points. However, the Redhawks pushed back as Hosket found Zack Smith for a 34-yard strike. the Govs led 35-14 at the end of three.

APSU added a 36-yard field goal from Logan Birchfield to start the fourth quarter, but after that momentum shifted towards Redhawks.

Hosket found Eric Williams for the touchdown early in the fourth cutting the lead to just 17.

SEMO’s next drive ended in a touchdown as Hosket found another receiver for his third touchdown pass of the day. APSU led the game 38-28 with 3:28 left in the game.

The Redhawks hit a 29-yard field goal, but it proved to late as the Govs  got the ball back with 16 seconds left in the game, ending the homecoming losing streak with a 38-31 victory.

Kentel Williams rushed for over a 100 yards for the second time this season, finishing the game with 167 total yards and one touchdown on 9 touches.

Jeremiah Oatsvall passed for 199 yards and two touchdowns while rushing for 66 yards and one touchdown throughout the game.

The Governors return to action by traveling to Orlando to battle against FBS ranked 18th UCF.