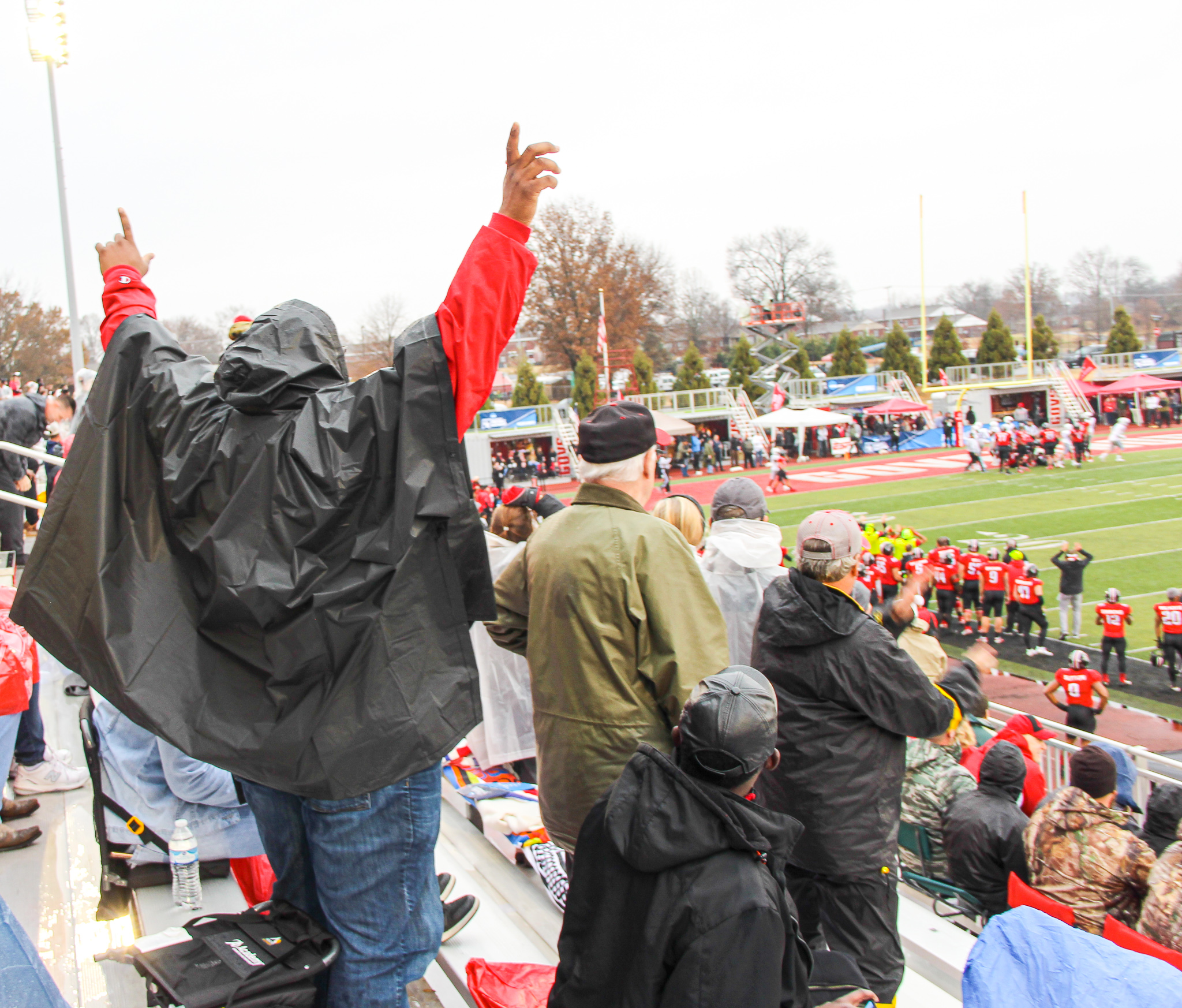 The sky was dark long before the sun set on APSU’s playoff game against Furman.

There was a cold, steady drizzle coming down over the stadium, which would occasionally spike into thunderstorms delaying the game over and over again.

Still, seated in the stands beneath the deluge was a solid mass of red.

The stadium was not entirely packed as one might have expected for this kind of historic game, but given the inclement weather, Govs did their absolute best to withstand and support the team.

This game rode in on a wave of excitement, coming right after APSU’s historic OVC Championship win.

“It was really fun to watch [the OVC Championship game]. I think the game’s going to be great. I hope that we get a lot of student participation,” Tipp Campbell, senior said. “I’m really looking forward to it. I think we’ve got a good chance.”

However, there were multiple obstacles to overcome in terms of securing a crowd to support the team during this huge game. On top of the awful, rainy, overcast weather, the game was already taking place during a holiday weekend when a majority of students are gone to celebrate with their families.

“It’s very wet, but it’s very exciting. We made it here to a playoff game,” one student noted, “It’s a big historic moment, and I’m very happy to be here to support them, and I’ll follow wherever they go.”

His friend chimed in, “I wouldn’t want to be any other place.”

This excitement was shared by plenty of their peers.

“I’m really excited because this is my first game, and I’m a sophomore,” Nichole Barnes said.

Another student said she endured the harsh weather to support the team, because it is the “first time [the Govs] have made it to the playoffs.”

This is actually the second time that APSU has made it to the playoffs. The last playoff game being in 1977. However, this game did mark the first time APSU has ever hosted a playoff game.

The crowd celebrated touchdown after touchdown as the team triumphed over Furman despite the terrible weather. Fans cheered through the rain, some even clad in face paint or with red and white pom poms in hand.

One lady remarked during the beginning of the fourth quarter, “Why don’t they [Furman] just give up already?”

The crowd cheered APSU’s victory when the clock ran out. Though some spectators had already left by then, foreseeing this win, as the Govs had an over 30-point lead for a large part of the game.

Though they were frozen and rain drenched, the crowd that oversaw APSU vs. Furman game witnessed history.