The initial tweet, shown below, has over 400 retweets and likes on the app and a growing thread.

MY ROOM HAS BEEN RANDOMLY SEARCHED 3 times!!! Not to mention they keep doing random pop ups and it is no coincidence that I am the only black girl of 4 roommates. I just had an RA herself(I won’t say her name) tell me out of her own mouth that my roommates are trying to set me

She responded to her initial tweet by mentioning the official APSU Twitter and APSU Housing and Residence Life’s account and has not received a public response.

Up to be put out! So now I have a problem. Nothing has been found in my room and I am continuously being harassed and I feel like I am being profiled so now it’s a problem. @austinpeay @ApsuHousing

Milam followed by posting a video of the Resident Assistants searching her room again even after the first tweet.

They are in here searching!!!!!! AGAIN pic.twitter.com/BzSM2qIhZA 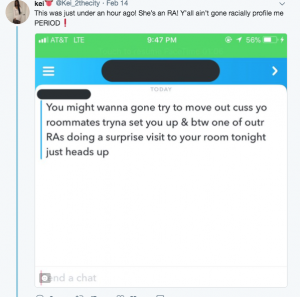 The All State has reached out to Milam and APSU Housing for comment.