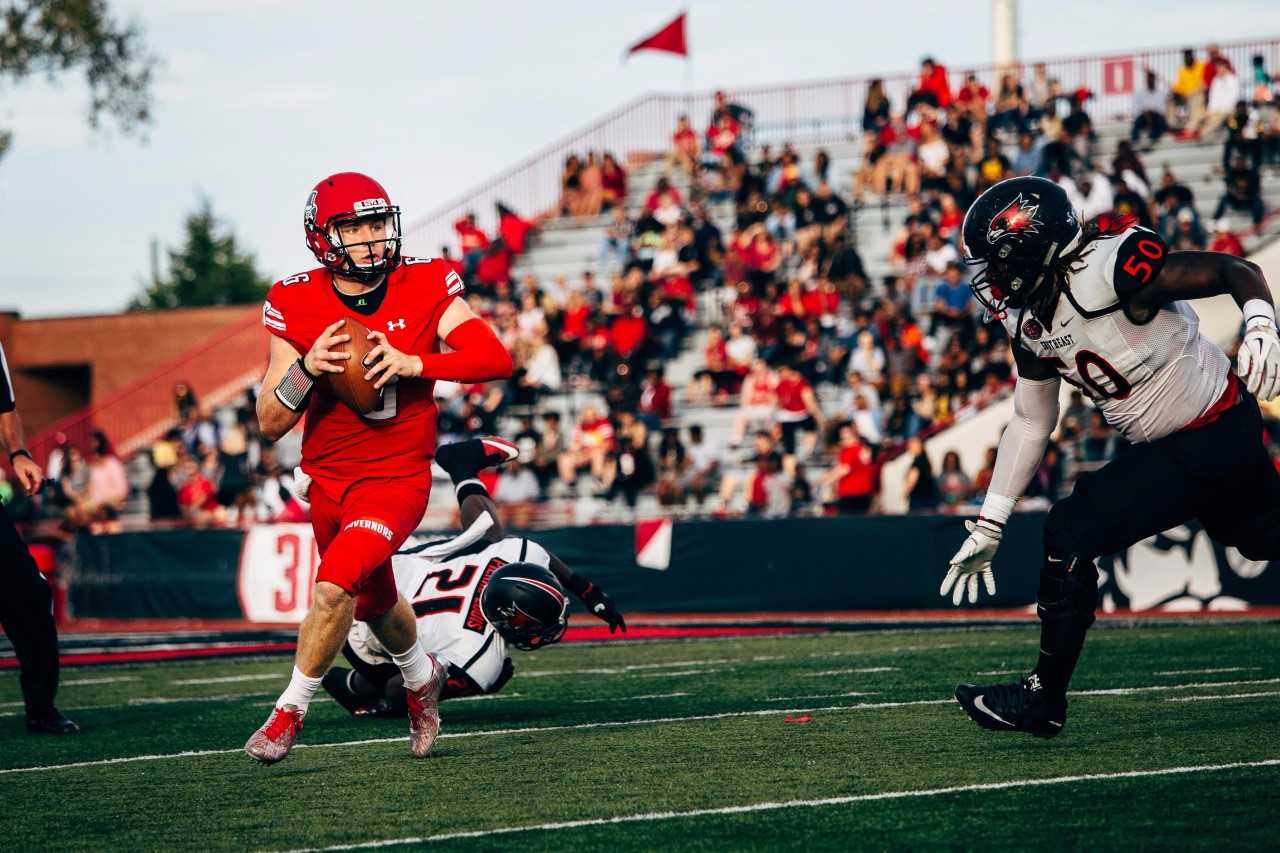 APSU continued to show resiliency Saturday, Nov. 11, coming back from a 24 to 7 third quarter deficit to win 31 to 24 against Eastern Kentucky.

The Govs received their seventh win of the season while also securing their largest comeback win since the 2011 season.

The win was the first in Richmond since 1977.

The game looked to be slipping away from the Govs before the defense finally stiffened up and the offense came to life under the freshman signal caller, Jeremiah Oatsvall.

EKU was all over the Govs from the beginning, jumping out to an 11-0 lead in the first quarter after a field goal on their first drive and a touchdown on their next drive after recovering an APSU fumble. After the touchdown the Colonels converted a two-point conversion on the Govs’ defense.

The Colonels kicked a field goal later in the second, jumping out to a more traditional 14 to 0 lead.

APSU responded with a 41-yard pass from Oatsvall to Kyran Moore. After the long play Ahmaad Tanner punched it in from a yard out to cut the lead down to 14 to 7.

EKU tacked on a touchdown with just three seconds left to extend their halftime lead to 21 to 7.

In the third quarter EKU struck first with a field goal.

APSU cranked up the intensity from there on out. Oatsvall found Moore once again for a 59-yard touchdown.

Oatsvall hooked up with DJ Montgomery in the early stages of the fourth quarter for a 17-yard touchdown pass to continue the comeback march.

The Govs’ defense smothered EKU for much of the second half, and they thwarted the Colonel offense again. The Govs drove down the field but settled for a field goal after a fumbled snap on third down.

The Govs tied the game at 24 all with just five minutes left in the game.

The defense responded strongly forcing a punt and giving the ball back to the re-energized offense.

Oatsvall and the APSU offense took the lead for the first time of the day when Oatsvall broke into the end zone to take a 31 to 24 lead.

The Colonels pushed the ball down field, thanks in part to a 15-yard penalty on APSU.

The Colonels hopes of tying the game fell short as an interception ended the game.

Jeremiah Oatsvall finished the game with over 300 yards of offense and three touchdowns, two in the air and one on the ground.

Ahmaad Tanner lead the game in rushing with 90 yards on the ground and a score.

APSU wraps up the regular season next week against Eastern Illinois, looking for a chance to make the playoffs.