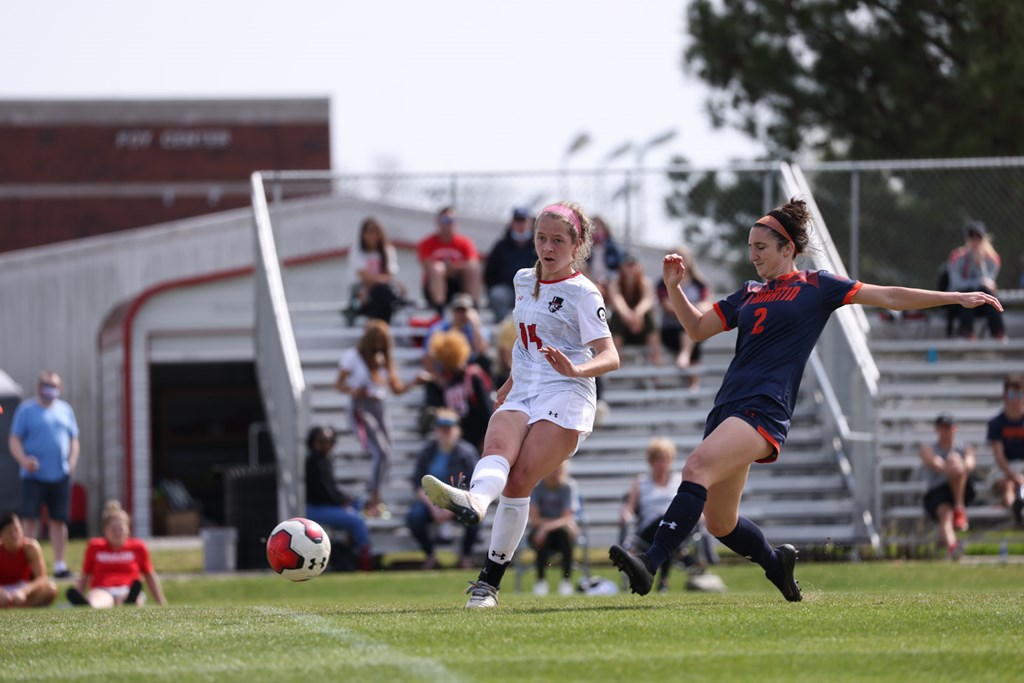 Tori Case (14) started in all 10 games as a freshman this spring. CARDER HENRY | APSU ATHLETICS

The tempo of collegiate soccer kept Tori Case and three other impactful freshman in stride throughout their first season at APSU.

After a difficult spring that saw the Governors finish 2-7-1, the current crop of newcomers aim to right the ship on the soccer program moving forward.

The competitiveness of Case’s high school and club soccer environments helped her transition to the Govs’ program this fall. She played in the TSSAA State Tournament for nearby Ravenwood High School in 2018 and was a member of the Tennessee Soccer Club, an organization responsible for developing some of the state’s elite high school players.

The midfielder was announced as a member of the Ohio Valley Conference All-Newcomer team on April 14. Case joins APSU teammates Morgan Drawdy and Anna McPhie as the only other players on roster to receive the award.

“It’s not just a reflection of me, it’s also a reflection of my team and the people I get to play with,” she said. “Soccer is not an individual sport at all, so for me to be able to represent not just Austin Peay, but my specific team as well is just really cool.”

Case started in all 10 games this spring and finished third on the team in scoring behind senior Claire Larose and junior Rachel Bradberry. Her three assists on the year were the most by any APSU player and was tied for fifth-best in the conference.

“We are delighted for Tori to be honored on the All-OVC Newcomer team,” head coach Naomi Kolarova said in a statement. “She has been clutch for us in the midfield this year. She is so reliable, reads the game well, distributes smartly, defends hard, and is an exceptional leader on and off the field.

“We think she is very deserving of the recognition from other coaches in the league, and are excited to see her progress in our program over her career.”

The freshman prides herself more in her defensive abilities on the pitch — she was named D12-AAA Defensive Player of the Year as a senior at Ravenwood — but frequently found herself contributing on the ball as a freshman. The first goal of her collegiate career came just two games into the spring season.

Case is one of four first-year players who participated in at least six contests this year. Isabel Petre, Hannah Wilson and Heather Haskins round out the group of APSU newcomers. All four combined to score 10 of the Govs 31 total points.

They’ll have big shoes to fill, though, following the graduation of seven seniors this spring. With another strong freshman class coming in, Case wants to recreate the camaraderie that the group currently holds, while setting a similar example that the seniors did for her in year one.

“We spend all of our time together: we eat all of our meals together, we practice together, we play together, so we’ve grown really close this year,” Case said. “I’m just very happy with that, and that we all are so dedicated to what we’re doing, and we’re so willing to make sacrifices. I just think that we’ve grown really close and that’s going to help us not only in school and life but also on the field. It’s good to have a good chemistry.

“We’re all really hard workers, really determined [and] really wanting to win some more games and do something here that makes a big impact. And I think we have the ability. We were so close in so many games that could’ve very easily turned our way. The future, I think, is looking really bright.”