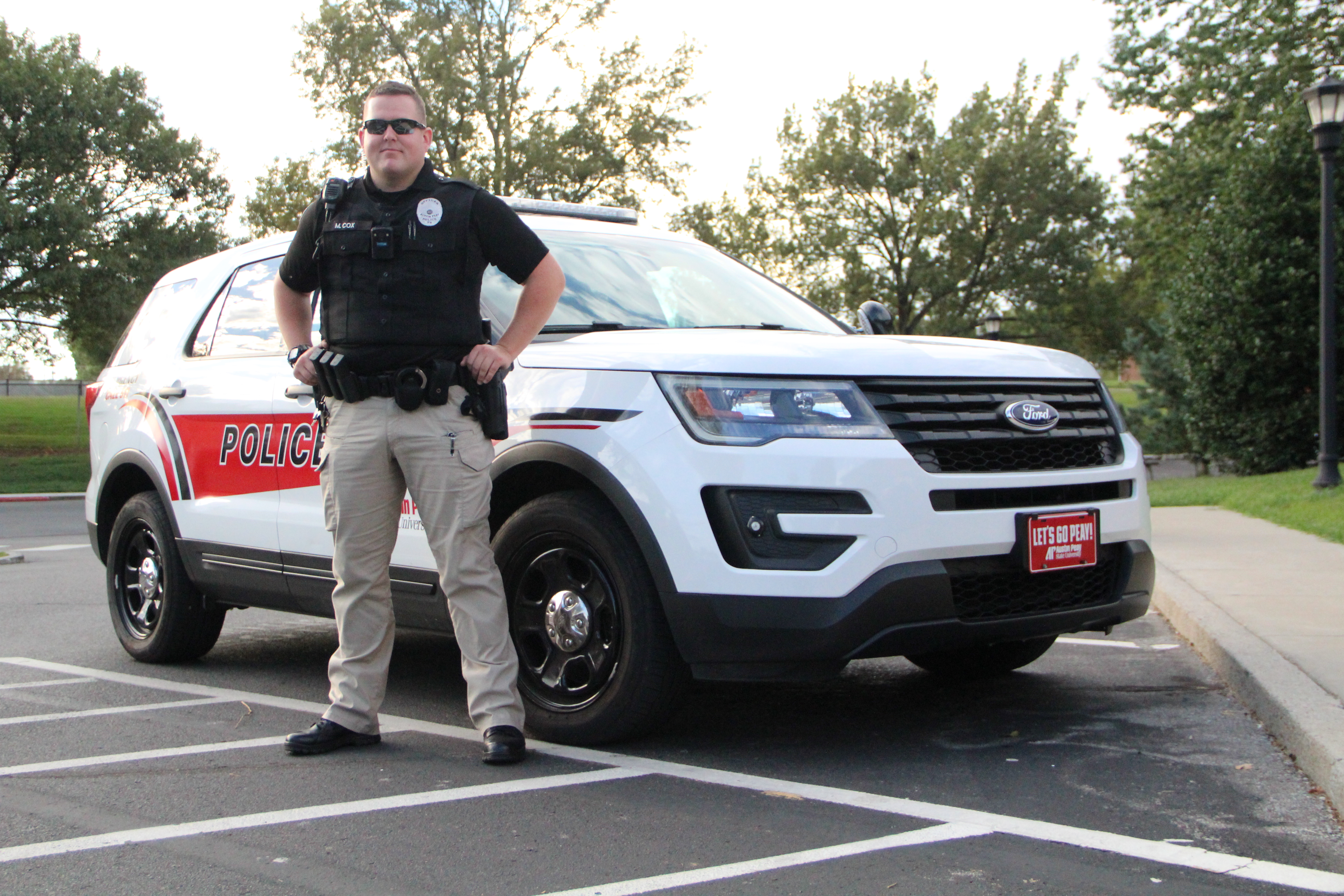 On Sept. 10, 2018 at 12:50 a.m., an individual reported a robbery. Although the notification first said to have taken place near the soccer field, it was later revealed to have occurred in the McCord parking lot off College Street.

According to campus Police Chief, Michael J. Kasitz, the confusion in the initial reports occurred because “the person was not familiar with campus.”

As of Sept. 14, 2018, there has been no update. Kasitz says, “We don’t have any more information than the initial report that went out.”

The initial report went out via email, but in addition to email, students with the RAVE app could be informed by text message.

RAVE Alert is designed for use only when an incident disrupts normal campus operations or threatens the immediate health and safety of the campus community. It can send an alert from campus police of incidents via text and email.

In addition to the RAVE app, APSU also has been making a big push for students to download the LiveSafe app. Where the RAVE app allows the campus police to contact students in times of emergency, including inclement weather, “the LiveSafe app does the opposite: it lets people contact us,” according to Kasitz.

Kasitz compared the app to having a blue light call box in your hand. It also goes beyond that, because it can allow the police force to track you through GPS for your safety.

LiveSafe was implemented roughly a year and a half ago according to Kasitz in Feb. or March 2017. At the app’s implementation the police force did a big push for students to utilize it and Kasitz has more pushes planned.

He expressed a wish to implement Donuts for Downloads again and “[set] up in the lobby [in the MUC] with a bunch of donuts and if you show us you have the LiveSafe app we’ll give you a donut. We did that the first year, and we might- we probably need to do that again. Plus, cops and donuts, how great is that?”

LiveSafe has numerous features for students and members of the APSU community to take advantage of such as, the Report Tips feature, Emergency Options, SafeWalk, Security Escorts and more. However, according to Kasitz, the most common calls and messages received on LiveSafe are about parking.

“Parking… That’s the biggest thing: parking. As far as anything else, a lot of times it will be … people will report stuff to us like they smell marijuana somewhere, people are being loud. We did get a mental health notification recently through the LiveSafe app, and we were able to take care of that. So, it’s used for a whole bunch of stuff, but mostly people report parking because they can do it anonymously. They can turn off who they are,” Kasitz said.

Kasitz doesn’t mind this trend, however, saying, “I’m glad people are using the app, because when they have to use it for something else, they have familiarity with it.”

According to Kasitz, they receive three to four messages a day on the LiveSafe app during the regular semester, and during the summer they can go weeks without anything coming in. Kasitz expressed devotion to responding to each of these messages or calls.

“Last week when we had the internet outage, I went in my patrol care, because we have mobile – we’re using cellular data in the patrol car,” Kasitz said. “Knowing that we couldn’t get the LiveSafe in the dispatch center at that point, I went into my patrol car and brought it up on the computer in there so that I knew we wouldn’t have a service disruption.”

He does this because of his expressed belief in the importance of this app for the APSU community, stating, “[It] empowers people. It’s something that they’re comfortable with. They don’t have to go out of their way to do it. It’s just like sending a text message, but it also allows them to do it anonymously. A lot of times when it comes to stuff, parking included, people don’t want their name attached to something, but when they know that we can’t get their information, it tends to allow them to feel more… free to report the stuff that they believe needs to be reported to us.”

Overall, he said, “I think it really helps the university community and gives us more information that we need to do our jobs.”

Another way the police force does their jobs is through their continuous training. While campus police do offer crime prevention programs to the university community, the officers themselves also have ongoing training.

“Every year, our officers to maintain their certification have to do 40 hours of in-service training, and some of it’s mandated by what we have to recertify in, and there’s optional topics, but we regularly go through use of force. We regularly go through constitutional law and things like that,” Kasitz said. “We do a ton of training. We do more than the bare minimum. Just because it’s that important. We also train with the city police [and] with the sheriff’s department.”

In addition to all of this, Chief Kasitz said, “[One of] the things we train with every year with our in-service training is dealing with mental health issues, because when you’re dealing with mental health issues there’s some legal things that you can do and you can’t do, but we work really well with the counseling center here on campus, and so we have the protocol set up so that when we believe that we have somebody in a mental health crisis, we contact the counselor on call, and these are professional people that are able to evaluate and sense what’s going on and then, they tell us what to do from there.”

Along with training, however, campus police must now also adjust to the rapidly growing population of students on campus. According to Bill Persinger, Director of Public Relations at APSU, the influx of new freshmen is “roughly the same amount [as] last year, but overall it looks like we’re going to have a positive enrollment growth.”

Kasitz said, “Last year was the largest freshman class we’ve ever had.”

The police force, as of Friday, Sept. 14th, had 19 sworn officers, five non-sworn security guards, three dispatchers, a technical clerk and a parking office supervisor. They also had student patrol and interns. In total, APSU Campus Police has 28 full-time employees that work for the division of public safety, covering 200 acres. Kasitz stated this to be, “actually a large-sized department for a small area.”

“We just added the 19th police officer… As the university grew this year, we grew with it. So, what we do is, we try to maintain a person-to-officer ratio; I can’t give you that exact ratio, because I don’t know it off the top of my head, but it’s good because we can respond to everything and not have people waiting for us to respond, but not so much that we’re stepping all over each other. So, there has to be a good balance there,” Kasitz said.

While the police force grew slightly, it still retains full law enforcement powers just like the Clarksville city police. Included in these powers is the right to carry arms on campus.

Due to this detail, the issue of deadly force arises, to which Kasitz responded, “When someone’s life is in danger, whether it’s my life or somebody else’s life, then we can [use deadly force], but even when it comes to that, even afterwards, there’s such a review that goes on through the prosecutors’ office, through the grand jury, to ensure that everything was done properly,” Kasitz said. “If we’re involved in a use of force to that level, the Tennessee Bureau of Investigation has to come investigate it, so that you have that independent group that’s looking at that situation as a whole.”

Persinger contributed to the topic adding that in his 27 years here at APSU he does not recall the APSU Campus Police ever having to use lethal force.

Nonetheless, according to CNN, as of May 25th, 23 school shootings have occurred this year alone, wherein, at least one person was shot on school grounds, grades K-college/university level.

At APSU, campus police are not the only ones legally allowed to carry weapons.

According to the APSU official website, “As of July 1, Tennessee law TCA 39-17-1309 allows generally all Austin Peay State University full-time employees with a valid handgun permit to carry a concealed handgun on Austin Peay property.”

While there are some restrictions as to where they are allowed to carry, such as the APSU Center at Fort Campbell, Boyd Student Health Center, Counseling Center, Middle College areas of the Marks Building, and the Child Learning Center, according to Kasitz there is no real way to enforce these restrictions.

Kasitz explained that when they register with the campus police, they provide the registrants with what they call the rights and responsibilities and it outlines where those areas that they’re not allowed to carry are. He also expressed a belief that those who go through all the effort to get registered in the first place would not break the law, because they are aware of the consequences.

Nevertheless, when it comes to campus concealed carry Kasitz said, “If they’re doing it right, you should never know that that person has a weapon on campus.”

This also means that, “unless somebody sees something on them, we’re not going to know… if they carry it where they’re not supposed to.”

That part of the law is purely on an honor code basis, but as Kasitz explained, “A lot of our laws are. We trust you not to speed. Sometimes you do and sometimes you get caught… and sometimes you don’t and that’s on the honor system as well. We have to have some trust in people and there’s only so much we can do in enforcing the laws, because we can’t follow people around and harass them to make sure they don’t have their guns on them when they go to those certain areas.”

Kasitz expressed a belief that, overall, “we have a very safe campus.”

“When you look at the size of our campus and you look at our crime statistics for Clery, if you look at our crime log, you’re not going to see a whole lot, but for somebody coming from an area that has zero, little to no, crime, it might seem like we’re crime-ridden,” Kasitz said. “So, it’s all about perspective, but if you really analyze it we’re fairly safe and we work hard to ensure safety,”

Still, the robbery which occurred on Sept. 10, left some people very shaken. Kasitz said he especially understood this from people who came from smaller communities.

“If you come from very small-town Tennessee this could seem like a whole lot of crime. That robbery could be a major incident for them. Those types of robberies are very rare on our campus. Maybe one or two a year. It’s a shame that it happens. We’re not an island, but we do everything we can to keep it as safe as possible.”

Still, Kasitz said, “If for some reason you don’t feel safe, call us.”

For more information on campus crime, the Clery Act requires campus police to publish a public crime log which APSU campus police hold in the Shasteen building. It is currently unavailable online, but The All State does publish a bi-weekly crime log within its paper and online.