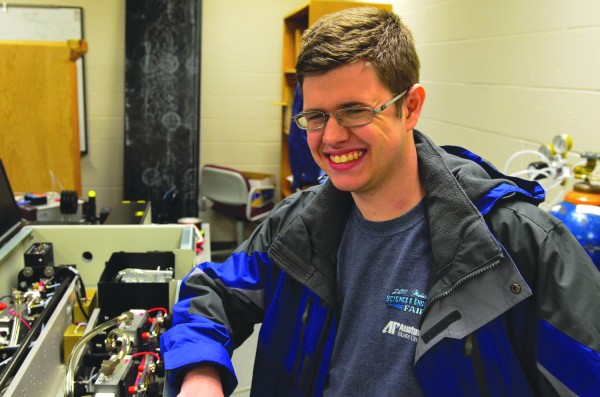 APSU physics junior, Chris Hayes, is getting a very rare opportunity to travel to Switzerland to study at the European Organization for Nuclear Research’s Geneva laboratory also called CERN.
Hayes was named as one of the students in the team with the University of Michigan Research Experience for Undergraduates program, which is highly competitive. The opportunity is rare, with only 10 to 12 students from the United States being able to attend. By being named to this team, Hayes will be traveling to Switzerland to work at CERN.

“I will be performing research into the underlying structure and interactions of matter, specifically in the field of high energy particle physics,” Hayes said. “I hope to participate in the search for theorized particles and their interactions, be it in quark-gluon plasmas or the search for new physics at high energy.”

Once the research contracts are given out in March, exactly what Hayes will be doing and with who, will be more concrete.

CERN houses the Large Hadron Collider, the world’s largest and most powerful particle accelerator. The LHC is the most recent addition to CERN’s complex of accelerators, having been added in September 2008. Essentially, the LHC throws particles at each other at high speeds to study what will happen when they collide.

In both the research and theoretical studies groups there are projects and data that will be observed, sorted through and analyzed. In the experimental group, a unique opportunity presents itself because of the Long Shut Down that started on Feb. 14. Hayes said the shutdown should allow him to help upgrade some of the main detectors and also see the inner workings of the LHC firsthand.

The Long Shut Down, as CERN named it, will last about two years while the accelerators on site are upgraded and maintenance is performed.

“I have always dreamed of having the opportunity to go to CERN, but it seemed like just a dream before I was accepted into the program,” Hayes said. “Research will coincide with this dream and I am excited to be able to participate in the research on the international level.”

Hayes said his interest can be summed up in a quote from Richard Feynman: “Our imagination is stretched to the utmost, not, as in fiction, to imagine things which are not really there, but just to comprehend those things which are there.”

Hayes simplifies the study of physics as the creative nature of the mind, comprehending the world that surrounds us.
Hayes suggests that his love of the beauty in things is what gives him the desire to figure things out. Hayes points out that when he looks up at the night sky, he sees the stars that everybody else does, but he also wants to know what all is out there and why it is so beautiful.

“It’s the wonder that we can observe galaxies millions of light-years away, that we can build 17 mile long particle accelerators to search for new forms of matter, that we can develop novel solutions to the energy consumption by manipulating a few physical properties of molecular structures in materials,” Hayes said. “That is what makes physics worth it to me … The fact that I can understand a small part of the wonder that the universe presents to us.“

King, the department chair of physics and astronomy pointed out that several well-qualified students applied for this REU in the past three years but Hayes is the first to have been accepted.

“CERN is the premier facility for the study of particle physics in the world,” King said. “This REU is a tremendous opportunity for Chris.”