One of the curious things I have encountered is Americans’ fascination into tornadoes is that tornadoes are virtually present in so many works of American literature, films, art and history.

It makes sense in a way since an average of roughly 1,000 tornadoes occurred yearly in the United States while the runner up, Canada, only experienced about 100 tornadoes per year on average, according to NOAA National Centers for Environmental Information.

What I notice with some people was how they think a particular group of tornadoes would look like. The type of tornadoes in question were violent (E/F-4 and 5). I saw the 1996 classic Twister which showed an F-5 wedge toward the end of the film.

Also, 2014 Into the Storm showed a wedge EF-5 near the end of  the movie, and they were not the only films with tornadoes of such characteristics. There are some issues with that stereotype.

To begin with, appearance does not always indicate strength, but it is a common perception that violent EF-4+ tornadoes are wedges (wider than height) or large, ugly monster twisters. A couple of those tornadoes were 2011 Tuscaloosa, AL EF-4 and 2013 Moore, OK EF-5.

However, there were some that defied stereotypes.

One of my favorite examples was an EF-4 tornado that touched down near Rozel, KS, and several storm chasers considered it to be one of the most beautiful tornadoes. According to The Wichita Eagle, the tornado was not particularly destructive since it stayed on open field other than grazing by a farmstead, but mobile radar measured 185 mph winds inside the tornado.

Another interesting tornado I also considered to be beautiful to watch was one that touched down near Bennington, KS in 2013 and remained almost stationary for roughly 45 minutes to a full hour. It was rated EF-4, but it could have earned EF-5 rating had it struck directly at a well-constructed building instead of staying on open farmland for the whole lifespan.

The mobile radar measured 247 mph winds inside the tornado which was way above EF-5 threshold (>200 mph). These two were highly visible most of time which made them two of most photogenic tornadoes of the recent years.

However, not all of tornadoes could be seen that easily, and violent tornadoes were no exception. Some were wrapped in rain, and several did spawn after dark.

Yet, news and media were partially guilty of creating this stereotype. More often than not, the news tend to broadcast scary-looking, ugly tornadoes hitting populated areas.

The 2011 Tuscaloosa tornado was considered as the poster boy of the whole super outbreak itself which included 4 EF-5s and 11 EF-4s, and the tornado overshadowed the other twisters from the same event. The tornado in question was widely shown on the news after ABC 33/40 live streamed the tornado tearing through Tuscaloosa and Birmingham, according to The Weather Channel. 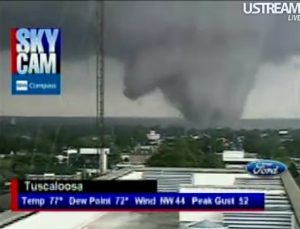 Screencap of Skycam of Tuscaloosa tornado

The tornado was extremely destructive because it ripped through major population centers. However, the twisters that had not made much impacts on human and economy often get disregarded regardless of F/EF rating, even violent ones.

The most interesting case of such coverage was in Middle Tennessee on April 16, 1998.

Multiple tornadoes touched down in and around Nashville, and the strongest of the tornadoes was rated F-3.  These tornadoes received so much attention from the news that a F-5 tornado in rural southern portion of Middle Tennessee was ignored by the media, hence the nickname “Forgotten F-5.”

Fortunately, the F-5 did not result in fatality, though 21 people were injured, according to NWS Nashville archive. The other two violent tornadoes, both rated F-4, spawned by same parent storms were also neglected due to rural locations and coverage of Nashville tornadoes.

Again, all of these examples above showed how people see twisters through the media and how otherwise noteworthy tornadoes, including violent ones, get neglected by popular media if they did not cause severe or incredible destruction. There were so many notable tornadoes out there for photogenic shows, bizarre behaviors or just unique qualities that had nothing to do with destruction.

*EF denotes Enhanced Fujita Scale which went into effect in 2007 to replace old F scale. I chose not to use those scale interchangeably because of difference between these two scales in how they were used to rate tornadoes according to Storm prediction Center.