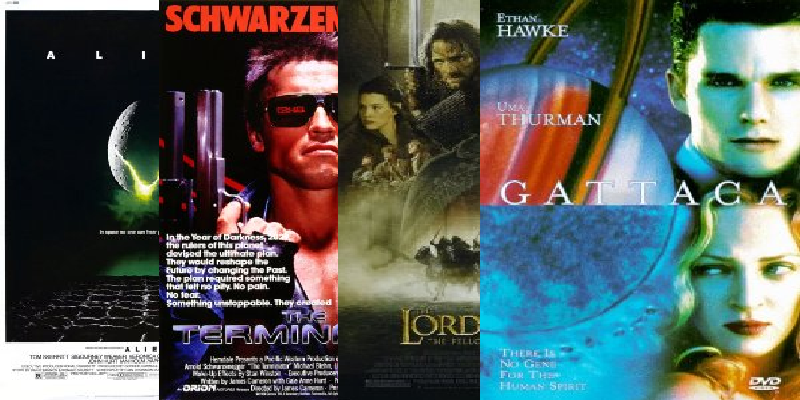 I’m sure there are people out there who, like me, are a bit late to the nerdy business. Well, you are in luck: I’d like to think I’m fairly well versed in the catch-up game by now.

This will be an ongoing thing, so be sure to check in at a later time for the video games, TV shows and comics, and I’ll organize them into categories with little tidbits and hints for easy reference.

This won’t go in any particular order, so don’t freak out about it. Right now, I’m just listing my top 10, and it is heavily tipped in favor of science fiction.

Okay, you saw this coming. Star Wars is often referenced in nerd culture, and you won’t get very far without knowing who Han Solo or Princess Leia are. You can totally ignore Jar Jar Binks, though. The rest of us do.

My parents were peeved when I said this was nerdy — it wasn’t to them, and they grew up long before “The Big Bang Theory” made it cool for losers to be losers — but it’s a must-watch if you want to understand anything a nerd says.

Now is a good time to marathon all of them, anyway: “Episode VII” comes out in December.

Before you watch this, you should watch the series “Firefly.” You may have heard you’ll get super depressed due to the fact that it got cancelled after one season. Don’t fret: They’re continuing things in the comic series, and that gives you way more nerd cred, anyway.

This movie is science fiction-oriented; the crew of a ship all band together to stick it to the man. Expect a lot of butt-kickery, mayhem and explosions.

Got this from opinionessoftheworld.com’s article.

You saw this coming, too. Don’t even lie, reader. I am such a big fangirl of this series, it’s not even rational.

Here’s my advice for these puppies: skip the fourth movie unless you, like me, really dig terrible horror plots. Much like Alice in the later “Resident Evil” movies, Ripley goes godmode, and that’s never good for film quality.

Sigourney Weaver does an amazing job in these, and I challenge anyone to find a cooler fictional heroine than Ripley.

What to expect: heart-pounding, jaw-clenching, edge-of-your-seat action. Ripley is the underdog who spends most of her time in the movie running from the Alien and finding ways to kill it. Plus flamethrowers.

I’ll go ahead and attach “Predator” here because the two go hand in hand. Don’t watch the second Predator movie; I wanted to claw my eyes out. But Arnold Schwarzenegger was amazing in the first movie, and “Predators” was to die for. 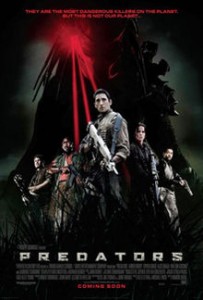 These have been compared to “Alien,” and with good reason. They’re both thrillers that feature lead characters being hunted by an alien beast until the humans escape against all odds. The only difference is that “Alien” is much more psychological, in my opinion. I get so much more involved emotionally in those movies than in “Predator.”

Since this is kind of a long list, I’ll put them all out for you and mark through the ones I don’t recommend. It’s not like I didn’t like the AvP movies, by the way (well, except Requiem; I hated that one), I just don’t want to ask too much of you readers.

Also, “Prometheus” is a prequel to the Alien movies, but you should probably just watch the films in the order everyone else did. It was an excellent movie, even though Charlize Theron got …well, never mind. 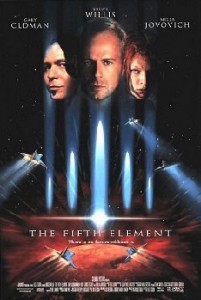 What to expect: Blue aliens, multi-passes and amazing costumes designed by the guy behind Madonna’s cone boobs; you’d be hard-pressed to find a more iconic nerdy movie. It’s a little ridiculous and a lot heart-warming and amazing. I have no recommendations here; just enjoy. 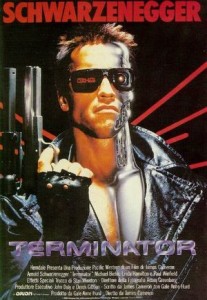 From the Terminator Wiki.

I miss the days when Schwarzenegger was all up in sci-fi. If you haven’t seen these, you’re more missing out on life than you are nerd culture. These are classics.

If you read the last article I wrote, you know where I stand on artificial intelligence. Skynet is my worst nightmare. It’s a defense network that spreads to other computers and gains the ability to nuke the human race into submission. The first movie is all about Sarah Connor escaping from one of the evil robotic terminators, played by Schwarzenegger.

Actors: Linda Hamilton and Schwarzenegger (“Terminator” and “Terminator 2”), as well as many others

This movie pretty heavily borrowed from the Ray Bradbury novel “Fahrenheit 451” and also reminds me of the book “The Gatherer,” but its awesome fight scenes and unique futuristic setting gives “Equilibrium” its own little something. I would heavily recommend watching it; this is where gunkata comes from. Expect a gloomy dystopian future and lots of action. 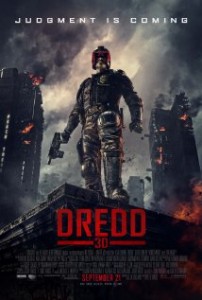 I think this one was mostly burned into my skull because my friends found out I was about to go to a convention where Karl Urban, AKA Judge Dredd, was going to be, and they got me to watch it. I thought it was amazing.

It was interestingly filmed (there’s a drug called SLO-MO that makes for a cool take), and I really liked that it focused more on how Anderson, a rookie Judge, came of age. Plus Lena Headey played an awesome villain, and I love me a good villain.

It’s all about two judges trying to make it through a huge building full of corrupt drug dealers and addicts with little backup, learning to depend on one another and kick tail.

8. Lord of the Rings series 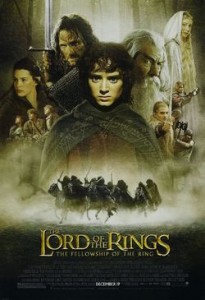 From the LOTR wiki.

To be completely honest, I’m not too fond of these movies, but I do accept they are extremely important to nerd culture. (Also, this list is even more sci-fi heavy than I initially expected.) I’m not going to say you should watch the hours and hours of extra footage of the characters wandering around woods and such, or that you learn elvish or whatever. I do, however, highly recommend watching the first movie, at least just to understand the hype.

Whether I’m his biggest fan or not, J. R. R. Tolkien is a masterful writer. Just because I don’t like his stuff doesn’t mean it’s not good, I can admit that. I do like “The Hobbit,” and the movie remake was actually really awesome. So yeah, I recommend watching “The Fellowship of the Ring” and all of the Hobbit movies. There are dragons, dwarves, elves and more adventure than you could ever ask for. 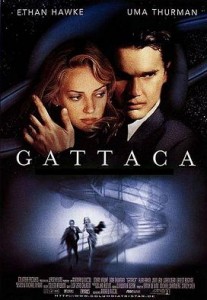 I actually had a hard time remembering the name of this one, but the Google search I typed in to find it should tell you a bit: “astronaut in world where people are perfect.”

Vincent is a guy with a heart problem who isn’t expected to live long. His parents were future hippies or something and didn’t want him to be genetically perfected, and the world isn’t kind to the weak. Despite his shortcomings, Vincent has big dreams. He goes through a lot of trouble to pretend he’s like all of the other perfect specimens out there, carrying around vials of blood and skin flakes that aren’t his own so he can keep up pretenses.

It’s a great movie, and it’s incredibly well written and acted, which is all you can ask for, right? 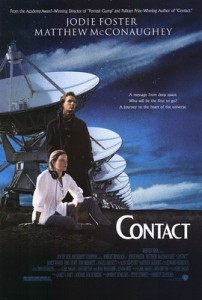 This movie probably speaks way more to me than most because I literally want to be Jodie Foster’s character in this movie. She plays an astronomer working for Search for Extraterrestrial Intelligence, and the movie follows her attempts to find life out in space. Hint: She succeeds. The film is just handled so well it’s amazing to watch and think about the possibilities.

Man, is it just me or was 1997 a great year for sci-fi? Maybe the reason “Alien: Resurrection” did so badly is because they rushed it to ride on that high. That’s pure speculation, of course.

In addition to these, absolutely include “Starship Troopers,” “Tron,” any and all superhero movies (even “Catwoman,” seriously), the Star Trek movies, “Bladerunner” and plenty of others. I didn’t list those above either because 10 is a small number, they weren’t on Amazon Prime or Netflix, and that’s a no-go for most, or I didn’t really like them that much personally.

As for other geekery, NASA Goddard released a pretty awesome time lapse to commemorate its five-year anniversary since launching the Solar Dynamics Observatory. Check it out:

Gah, that dramatic music gets me every time. *sniff*

Another neat thing I’d like to share is my amazing decision to bite the bullet and shell out the cash for a National Geographic subscription. It is so amazing. I now have unfettered access to magazine archives dating back to 1888. The first year I hit up was 1969, of course (not because of that, pervert), to see what NatGeo had to say about the July 20th moon landing. It was an awesome read, and I highly recommend it.

Another cool thing; Marvel is unleashing new Star Wars comics. Using the points I saved up being a geek over at Game Stop, I ordered the first issue of “Star Wars” and “Darth Vader.” It’s limited edition, and I don’t have to leave my house, so win-win. I don’t know if they still have that deal going on, so check it out! They only printed about 5,000 of each.

That is all for now, dear friends. Marina out. Blog you later.