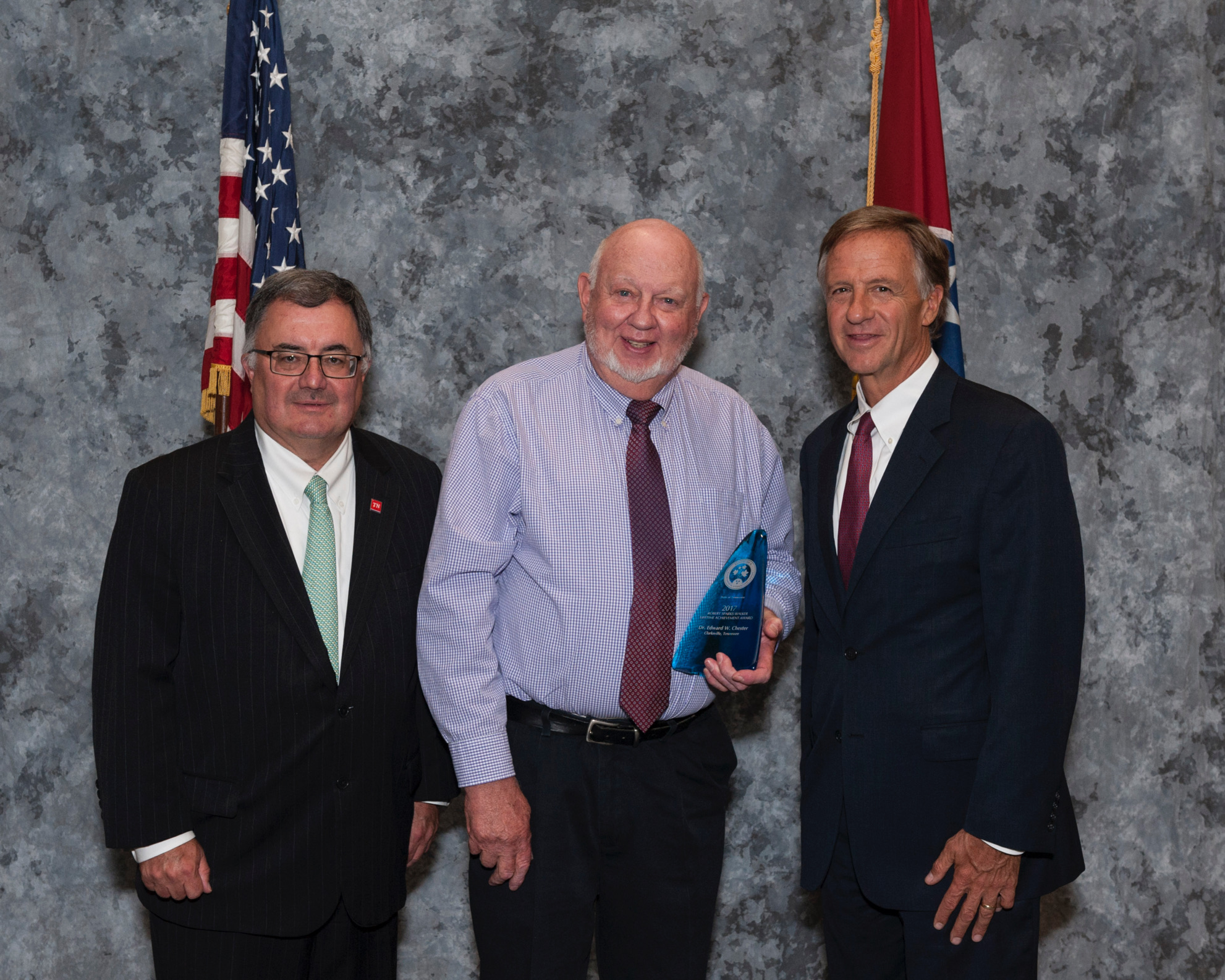 NASHVILLE – Tennessee Gov. Bill Haslam and Tennessee Department of Environment and Conservation Commissioner Bob Martineau presented Dr. Edward Chester with the Robert Sparks Walker Lifetime Achievement Award at the 2017 Governor’s Environmental Stewardship Awards on June 16.
“Over the past 50 years, Dr. Chester has instilled the importance of environmental conservation to his students, botanists, and nature enthusiasts across the state,” said Haslam. “Through his writings, teaching and scientific contributions, we know more about Tennessee’s flora than ever before.”
Chester, Emeritus Professor of Biology at Austin Peay State University, has dedicated his career to locating and identifying rare plants in Tennessee. With over 100 scientific publications and 20 published books, his work reveals a unique understanding of the needed preservation of Tennessee’s natural heritage. As head of the Tennessee Flora Committee, Dr. Chester and his colleagues recently published the first-ever guide to all known native and naturalized plant species in the state.
Throughout Chester’s career, he has conducted floristic inventories of industrial, private and public lands, including Tennessee State Parks and Natural Areas. TDEC’s Division of Natural Areas regularly utilizes Chester’s reports to evaluate site protections. His work at Barnett’s Woods in Montgomery County led The Tennessee Nature Conservancy to purchase the property in 1981. In 2005, the area was transferred to the state and designated as a Natural Area.
Chester serves as a member and a past committee chair of the Tennessee Rare Plant Scientific Advisory Committee, a group legislatively mandated to recommend changes to Tennessee’s rare plant list, since 1980. He was named the Conservationist of the Year in 2011 by the Tennessee Native Plant Society.
As a native Clarksvillian, Chester started his career teaching locally in the Montgomery County Public School System prior to completing his PhD in Botany at the University of Tennessee. Upon graduating in 1966, he began his career at APSU. Forty-eight years later, in post-retirement, he has continued to work, teaching General Biology as an adjunct, serving as Curator Emeritus of the APSU Herbarium, and continuing to serve as the state’s botanical leader.