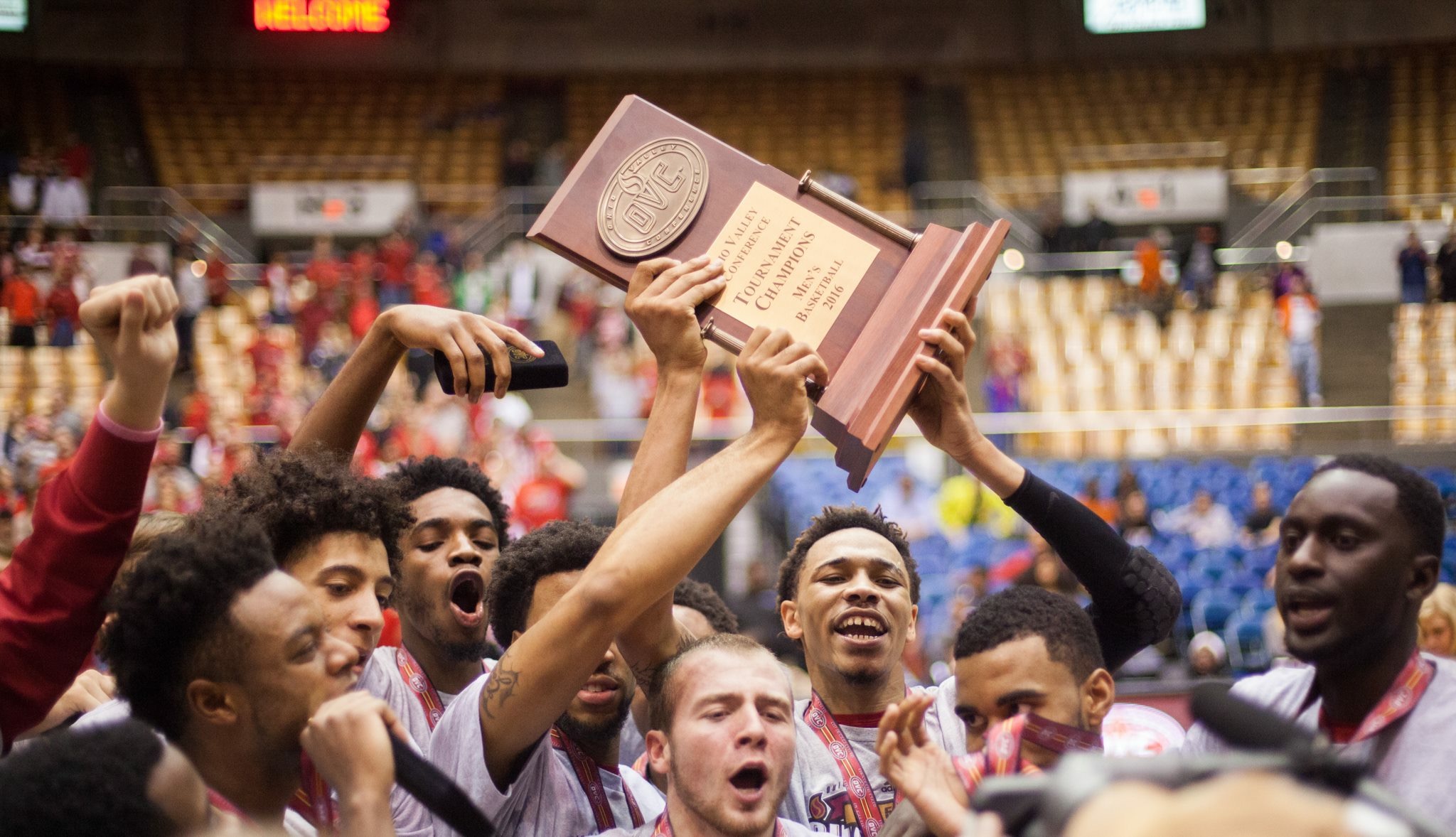 Shouts of “Let’s go Peay” filled the Nashville Municipal Auditorium as hundreds of students and fans delayed their spring break plans and made the trip to Nashville to see APSU win the OVC championship for the first time since 2008.

APSU came back from a rocky start to beat the University of Tennessee at Martin 83-73.

Entering the night, APSU was 0-2 in regular season play against UTM, including a home loss in overtime.

UTM hoped to win their first championship but were unable to stop the Govs, who were peaking at the premier time.

The Govs were the determined Cinderella of the OVC this year, and the first eighth seed to ever win the OVC Championship.

UTM opened up the game with a fast-paced 11-3 run fueled by 3-pointers and free-throws. Martin senior Alex Anderson went 2-2 from the field during the run.

APSU struggled to get going at 1-6 from the field. Jared Savage went 0-4 behind the arc for the Govs in the first five minutes.

​Martin’s pace was broken by Khalil Davis, who was the only Gov to score in the first five minutes, followed by a defensive foul from Martin forward Myles Taylor.

On the ensuing possession, APSU senior center Chris Horton drove to the basket to open his account. Savage broke his opening drought with a 3-pointer to cut Martin’s lead to 11-10.

​APSU created turnovers but continued to struggle from the floor, including a miss from the paint that would have given the Govs their first lead.

Despite entering the first 10 minutes with offensive woes, the Govs played strong defense to hold the Skyhawks to 4-11 from the field.

​Robinson sent a pass to the rim that connected with Horton to give APSU their first lead at 14–13. Savage followed up with two 3-pointers. Davis continued the Govs’ momentum with a layup, catapulting them to a 9-point lead.

Martin broke the Govs’ 19-2 run when Taylor drove down the court for a lay-up that cut APSU’s lead to 7 points.

APSU was able to establish the lead off the backs of Horton, Davis and Savage, who collectively had 13 of the Govs’ 15 rebounds. John Murry opened up his personal scoring with a field goal that put Govs ahead 26-18.

With less than five minutes in the first half, the Govs’ leading rebounder Horton went down on the court and was assisted to the locker room by medical staff. Chandler Rowe of UTM was given a flagrant foul for the play that injured the Govs’ star player. Robinson then converted both free throws to put APSU up 29-20.

Horton returned to the court a few moments later to a wall of cheers. During his absence, the Skyhawks used a 3-pointer and a few short-range shots to come within 2 points of APSU’s 29-27 lead.

Murry slipped in two continuous triples to slide APSU back to a 7-point lead. Jacolby Mobley answered for Martin with a breakaway dunk. Savage responded with his fourth 3-pointer of the night, extending APSU’s lead to 38-33 at the half.

The opening half of the championship was a perfect representation of how APSU’s stay in Nashville had been going.

The Govs opened up the half with missed shots from behind the arc while Martin increased their lead.

The Govs fought back, created turnovers and got hot behind the 3-point line, going 7-17 to take control of the game.

Martin earned their points from in the paint and on fast breaks. Savage led the first half with 12 points.

Savage picked up where he left of for the Govs, going 3-3 from behind the arc to open APSU’s second half scoring.

Robinson joined in with his first triple of the game. The combined freshman and sophomore force broke APSU out to a 12-4 run in the second half.

Martin used solid free throw shooting to stay close, but Davis sent in a 3-pointer to extend APSU’s lead to 53-42 with 15 minutes left in regulation.

APSU continued to convert opportunities from the field with a Robinson 3-pointer.

UTM struggled from the ground in the second half, going 16-45 through the opening 30 minutes.

The crowd’s energy partially fueled the Govs to control the opening and mid-point of the second half. Though the game was in Nashville, the energy in the building had painted the Nashville Municipal Auditorium red.

Horton followed a play into the paint for a layup, earning his eighth point of the night and a 62-46 lead for the Govs. Robinson went to the free-throw line for APSU having gone 2-2 on the day, but missed both of the shots.

Chris Porter-Bunton scored his first points of the night with a 3-pointer on his fourth attempt. Murry proceeded to make another 3-pointer, giving him 11 points in the game.

UTM’s Twymond Howard’s layup gave him 20 points on the night, and UTM called a time-out to try to cool the Govs hot streak from beyond the 3-point line.

Martin used quiet close-range shots and free-throws to keep the the Govs from pulling away, but the 3-point shooting stayed solid for APSU. Savage hit a 3-pointer to put APSU up 71-60 with just over three minutes left.

Robinson drove to the basket and was fouled while still connecting with the layup, giving APSU a chance at a 3-point play. Robinson hit the free throw putting APSU up by 14 with under three minutes left.

Mobley then fouled Robinson for the third time in the game. Robinson scored both shots to extend APSU’s lead to 76-64.

UTM’s Alex Anderson and Mobley struck for three to pull Martin within 8 points with just over a minute left. Robinson then hit a trio of free throws, extending APSU’s lead.

APSU held the ball to close out the game 83-73, earning the title of OVC Champions and a NCAA Tournament berth.

​The improbable Cinderella team from APSU made history as the first eighth seed to ever win the OVC Tournament and will continue their season into the biggest tournament in basketball.

Savage ended the night with 24 points, followed by Robinson with 20. Horton ended with 8 points and rebounds. All three were named to the OVC All-Tournament Team, with Horton being selected as Most Valuable Player.

The Govs were able to give Dave Loos his fourth Ohio Valley Conference Championship and the program’s fifth overall on his 69th birthday.