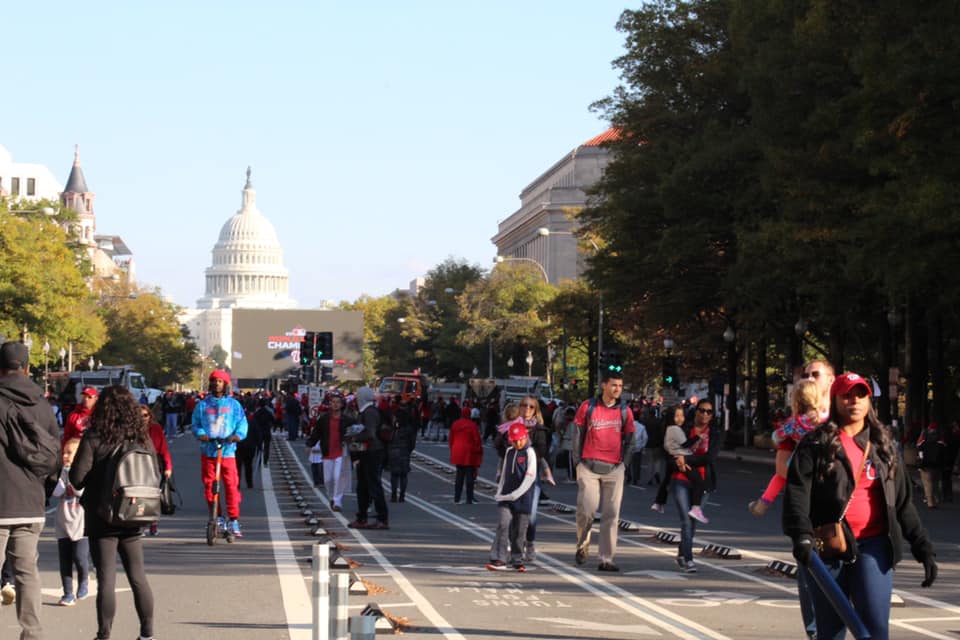 The streets were red. Children sat in the road and pawed at the ground to throw confetti over themselves. People smiled and embraced and laughed, and seemingly everyone stood in the same place, in the same feeling. The Washington Nationals had already won. This was just the after-party.

Reportedly thousands attended the Nationals’ Parade on Saturday, celebrating their first-ever World Series win. The part of Constitution Avenue that runs along the National Mall, which is usually crawling with tourists, swelled with red-clad locals.

Even before the parade, street vendors and boutiques alike sold victory shirts. The front page of the Washington Post declared, “At last, Nats are champs.” Inside my D.C. conference, fellow student journalists and conference speakers alike all whispered excitedly: What a time to be in Washington, while history is being made.

History, as I saw it, sat in the White House, with impeachment proceedings. I hadn’t kept up with this baseball season past its opening; I had no idea it was even over. The sudden sea of red also surprised me. So many hats with Walgreens logos, I thought, staring at a Washington Nationals’ display at Macy’s.

Finally, someone clued me in.

Even after learning the significance of the event, I still found it difficult to feel the rippling wave of enthusiasm surging through everyone around me like a livewire. Even the conference we were attending [the Associated Collegiate Press (ACP)/College Media Association (CMA) National College Media Convention] seemed to feel it, freeing photojournalists in attendance from a session so that they could photograph the parade (given they submit their photos to an onsite competition).

I was still slightly uneasy about the whole affair. Sure, parades could be dazzling, (as long as you were participating in them) but I had planned to visit the National Mall in my downtime Saturday, to see the Smithsonian and make it back to my hotel without having to walk for an hour.

I saw the parade, at best, as an amusing inconvenience, at worst, a never-ending bulwark raised against every one of my plans.

Regardless, it went on, so did my day.

Plans came to fruition and fell apart and came back together and one way or another we got stuck at the tail end of the parade walking through Constitution Avenue.

Music blared; children ran around dressed as sharks; food trucks dwindled long past the parade’s closing, idling on the side of the road; a mom shared an ice cream cone with her young daughter, Come on, stick out your tongue, while the sun shone down on a cold day.

It looked like everyone was there. The invisible locals revealed themselves, pouring out onto the street long after the actual parade had ended. Tourists bought Nationals’ shirts to drape over their coats. Strangers embraced in joy and excitement.

D.C. was alive and happy and at peace. The epicenter of American politics rarely appeared this friendly and congruous. Something shifted in the euphoria of that legendary win.

Walking through the throngs of people huddled and smiling in the cold November air, I felt that some part of each person did love everyone in the way that they all loved the Nationals, at least at that moment.

In that moment, the tourists were locals, the locals were tourists, wandering through the blocked off streets and encircling the visiting hotspots. All of the Trump and Obama t-shirts were replaced by red ‘W’s and ‘World-Series Winners!’ Everyone who loved the Nats or loved D.C. or loved the feeling of finally feeling victorious in D.C. was united; D.C. was united.

I never felt that way before. I never followed a sports team to victory or followed many sports teams at all for that matter, and I never truly followed the Govs.

The Govs, whose football team recently won their first overtime game since 2007 (a fact I only knew peripherally). Prior to the National’s win, this likely would have gone over my head, but after I shared a small part in that moment, in that celebration, this victory for the Govs meant more to me.

A feeling of pride swelled inside of me. Probably not shutdown-Constitution-Avenue-so-that-thousands-could-party-pride, but pride, nonetheless. Suddenly I wanted to cheer our team to success. I wanted them to win big. I wanted to be gathered in a crowd of my peers eliciting a cry of victory after the Govs finally took it all the way.

Being in D.C. during this piece of sports history, not just to hear about it, but to experience their joy as my own, made me finally understand the draw of sports, beyond just the game.

I think it might have even made me a sports fan, at least a little bit, because I wanted APSU to feel united the way D.C. felt united, even if just for one day.