If you have been anywhere on campus recently you have probably noticed that there are heavy construction projects that have been going on for some time now.

According to Al Westerman, director of Facilities Planning and Projects, there are two construction sites currently on campus.There is the Maynard Mathematics and Computer Science building, which is located north of the Hemlock Semiconductor building. 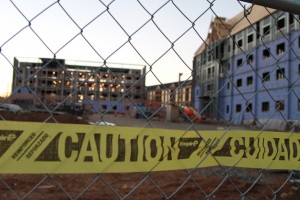 While many may be annoyed with the ongoing construction on campus, one can expect that there are professors and students who are looking forward to them being completed and are glad the new buildings are going up.

Dr. Jator, a professor of applied mathematics here at APSU, is excited about the new Maynard building. In regards to the mathematics department in general, “We will have an identity on campus and beyond.”

He goes on to say that, “Unity and collaboration are conventional in the departments of mathematics and computer science, hence being together in the same building will be wonderful.”

Amber Law, a junior and former computer science major says that even though she is no longer in the program, “It is exciting to see that two departments that have never really had a sense of identity can now come together in the same building and have a more unified sense of focus.”

She states further that, “It seems like any time a new building is put up, it comes along with a few more bells and whistles that will allow students to be more engaged in the learning process.”

There are also three projects that are set to begin soon. There is an Animal Husbandry building that will begin construction on the APSU Farm and is expected to be completed by the start of the spring semester in 2014. 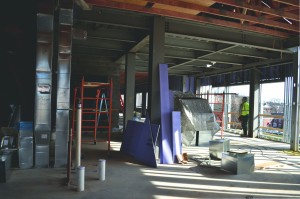 The new Govs football stadium is still in the design phase and is considered too premature to predict when it will be completed. There will also be new ADA projects starting on Monday, Feb. 4. They will be small but will be in certain areas that involve pathways and parking spaces.

Al Westerman said, “There are always safety concerns around each construction project, but we have the contractors erect barriers, signs and other warning devices to alert those nearby of the potential hazard.  As long as visitors respect and obey these safety warnings, they should be perfectly safe.”