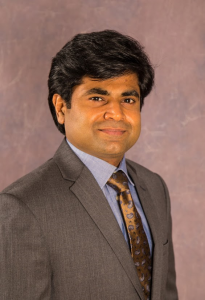 APSU has named Rajalingam Dakshinamurthy as associate provost for research and dean of the College of Graduate Studies.

Dakshinamurthy is originally from Western Kentucky University where he was an associate professor and assistant chair of the department of chemistry where his lab studied, “gold nanoparticles capped with a range of molecules like carbohydrates, dyes and drugs using our green, single step patented technology for various biological applications,” according to his WKU website, www.rajaslab.wordpress.com.

Dakshinamurthy will replace Interim Dean of the College of Graduate Studies Mike Gotcher.

In these roles as associate provost and dean of graduate studies, Dakshinamurthy will be responsible for promoting and expanding research and scholarship throughout APSU, as well as providing strong direction and leadership in the College of Graduate Studies.

“I greatly look forward to working with President Alisa White, Provost Rex Gandy and with my colleagues to advance this great university,” Dakshinamurthy said. “Our combination of outstanding undergraduate and graduate students and a renowned faculty create a unique synergy at APSU. I am looking forward to finding ways to strengthen the training we provide to students, and integrating these activities and leveraging scholarship opportunities across campus.”

In his role as director of the chemistry graduate program at WKU, Dakshinamurthy proposed the inclusion of a new research intensive master’s program, which aimed to prepare science graduates as entrepreneurs. As an adviser and mentor to young students, he has guided 12 graduates, 30 undergraduates and 10 Kentucky Gatton Academy of Math and Science students for their excellence in research.

As a researcher, Dakshinamurthy has more than 30 publications related to the field of biomedical sciences, and has secured a patent for a method of synthesis that holds nanoparticles capped with drugs. He has been awarded nearly $1 million in grants as a principal or co-principal investigator.

Dakshinamurthy received his bachelor’s degree and dual Masters of Science and Philosophy from Bharathidasan University in India, and his Ph.D. in biochemistry and structural biology from the University of Arkansas.