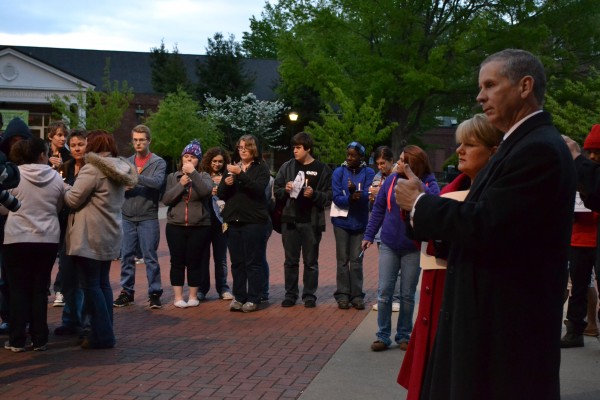 Members of the APSU community participated in a march and vigil to memorialize the tragedies that took place in Boston at the Boston Marathon on Monday, April 15 and the week following. Jessica Gray | staff photographer

Despite being miles away, APSU paid its respects to the Boston Marathon bombing victims on Wednesday, April 24, with a “Peace Walk” and vigil.

The Peace Walk followed the one-mile route on the campus’s new GovsTrails, and the candlelight vigil was held afterwards in the UC Plaza. A memorial was set up in the plaza for the three victims who lost their lives in the bombings, and the MIT officer who was killed in a shootout with the suspects.

Many members of the APSU community participated in the march and vigil for victims of the Boston Marathon bombings that occurred on Monday, April 15 and the tragic week that followed.

“It’s very tragic. With me being a social work major, I want to affect change. I would love to do international social work and work with people who may not necessarily be affected, but live in a country where this happens every day and to see if there’s any way we can make [the world] a better place,” Jones said. 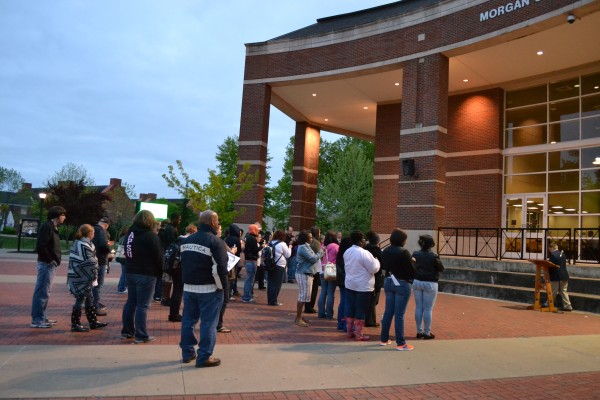 Participants listening to a speaker during a vigil on Wednesday, April 24, that memorialized the victims lost in the week-long Boston tragedy that started with the bombing of the Boston Marathon on Monday, April 15, and the killing of an MIT officer. Jessica Gray | staff photographer

Jones also expressed her encouragement for other people to see the good in the world and aim for peace.
Martin Richard, 8, who was killed in the Boston bombings, inspired Thompson’s idea for the event.

“I have a 9-year-old and I can’t imagine the disheartening loss of the parents who took their child to the Boston marathon, and they didn’t take him home. I saw him holding a poster that said, ‘No more hurting people. Peace’ and (that) touched me,” Thompson said. “We need to keep this little boy’s message out there — that message of peace.”
Thompson said people want a way to articulate that they care in the aftermath of tragedy.

“(In Clarksville) we can call attention to it and do something like this where we collectively remember those who lost their lives and do something to promote peace amongst all of us,” Thompson said. “We want to promote more peaceful conditions in which it won’t be as likely to have this happen again.”

“Tragedies don’t last because of the resolve of human spirit, and that’s what I love about this country. Our human spirit is strong and resilient. So let us move forward and learn to honor those perished in the bombings and let us always resolve to remember that America has more in common than we have in conflict.”

The UC plaza was filled with candlelight, despite the cold weather and wind. Students, staff, community members and others came together and sang “Amazing Grace” in memory of those lost.

Pitts complimented APSU’s event, saying “It shows that, while we are separated in miles, there is no distance in spirit. We’re there in spirit for those who suffered death and injury at the Boston marathon.”

Thompson pointed out that violence happens all over the world and Boston’s tragedy is just one example of such tragedy.

“All over the world, [people] are killed for one reason or another ­­— caught in the crossfire of wars and terrorism,”
Thompson said. “If you really have peace as a goal, it’s peace for everybody. It sounds difficult, but peace is hard work, and it starts with each person individually.”