APSU was taken back to ancient Greece with the Aristophanes play “Lysistrata” from Wednesday, April 17, through Sunday, April 21. Sponsored by the Center of Excellence for the Creative Arts, the play focuses on the consistent war between Athens and Sparta and the efforts of the cities’ women to end it. After growing tired of their husbands and lovers constantly being gone at war, the women of Greece teamed up and withheld their bodies and sex in hopes of forcing the men to make peace.

Darren Michael, associate professor of acting and directing, directed “Lysistrata” and said the idea for the production came about while teaching the play in an introduction to theatre class. 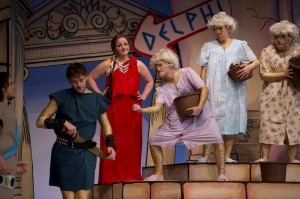 “My graduate school did a version, and I thought ‘eh, it’s kind of alright,’ but I hadn’t really thought about producing it since about three or four years ago,” Michael said. “We started talking about [the play] in class one time. I reread the script and thought ‘hey, this is kind of interesting. There [are] some things I could do with this.’ And I think it’s relevant that — with this generation of kids, there hasn’t been a year that has gone by [where] we haven’t been in a war.”

Throughout the entire show opening night, the audience was vocal with laughter, catcalls and applause. “[The characters’] countries are fatigued by a never-ending war; husbands, fathers and sons are nearly invisible from their homes because of their duty to their country,” Michael said. “What struck me most about this play was how it tells the story. Like the best comedies, it deals with very serious subjects in the most consumable fashion. It makes us laugh through our despair. At its heart, ‘Lysistrata’ is a tale of fighting for what you believe in.”

Maggie Jackson, who played one of the women of Greece in “Lysistrata” as her first APSU theatre production, pointed out that she believes one of the most prominent themes of the play is that even a group which is oppressed can rise and conquer if it is aware of its strengths and knows how to use them to its advantage.

RaMarcus Norris, who played a man of Greece and the Athenian Ambassador, noted the importance of Lysistrata as both one of the first feminist plays, as well as one of the earliest protest plays. “I feel the message is made clear that women are just as powerful to take care and handle things men do,” Norris said. 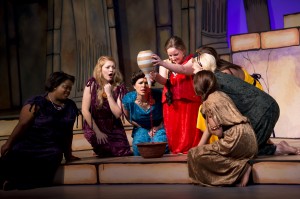 Michael stressed the importance of trying new things in theatre, and said a big reason why he decided to produce “Lysistrata” is because not a lot of people see ancient Greek plays performed nowadays. Michael said theatre departments and directors generally try to find plays that they know audiences “just want to see” or plays they “lovingly call academic.”

“You may have read them in world literature; you may have read them in intro to theatre; but you probably don’t know much about them,” Michael said. “So, we choose those plays to give students a taste of something else and see if they like it. That’s really why I chose the play: as a challenge to see if I can make it interesting for my audience.”

Michael said the funny thing about the arts is that it can appeal to everybody, no matter one’s interests. “We get the bum rap for not being the ‘money-making field,’ but the arts are probably the only kind of unifying thing in our society.” Michael said.

“Stories … are the only thing that tie us all together. I don’t know a physicist from a garbage man who doesn’t like a good story,” Michael said. “We are all connected by that. The challenge is to find the stories the physicist, the garbage man, the ballerina and the fireman can all sit in the same room and enjoy or find something that speaks to them. Theatre does that really, really well. Television does it well, film does it well, [but] theatre does it differently.” 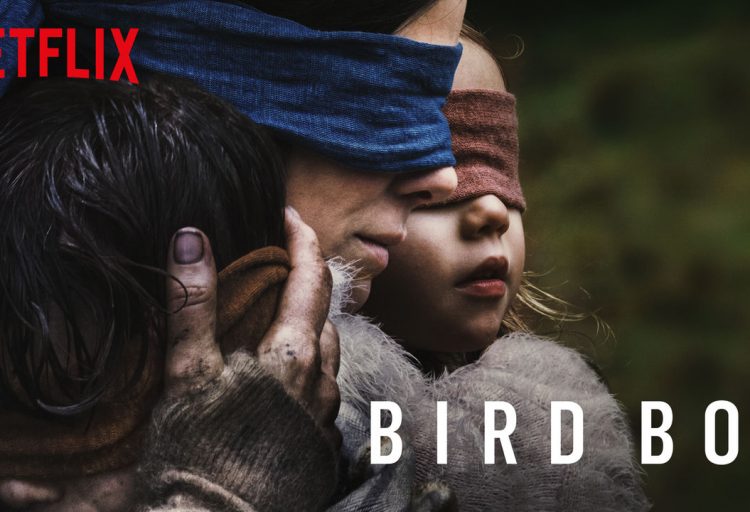