The Lady Govs have gone to Morehead Ky., to try and finish January with an OVC win on the road. They beat the Eagles the last time they met on Tuesday, Dec. 21, at the Dunn Center, 60-57. Currently, the Eagles are ranked second in the conference. The Lady Govs are ranked fourth.

Lady Govs struggle offensively down the stretch. They shot 34 percent (11-of-32) in the second half.
Olszewski led the team with 15 points. Thomas scored 14 and Bussabarger finished with 12.

Eagles Chynna Bozeman scored 17 in the second half. She finished the game leading all scorers with 30 points.
Lumpkin scored 18 and Harris added 12.

Update: 7:04, second half
Olszewski makes a jumper to help the Lady Govs stay close to the Eagles. They remain behind, 47-52.

Halftime: Lady Govs lead 32-30
The Eagles end the first half with a 7-0 run to close the Lady Govs lead down to two points.
Lady Govs shot 41 percent (15-of-36) from the field.
Bussabarger leads the team with eight points. Olzewsky and Rayner have both scored six.

The Eagles shot just 21 percent (3-of-14) from three-point range in the first half.
Bozeman leads all scorers with 13 points. Harris added eight and Lumpkin scored seven.

A quick 6-o run has Lady Govs ahead 26-17. Eagles failing to rebound and turning over the ball.

Update: 7:39, first half
Lady Govs staying on top of the Eagles, 20-17. Bussabarger and Rayner both have six points. 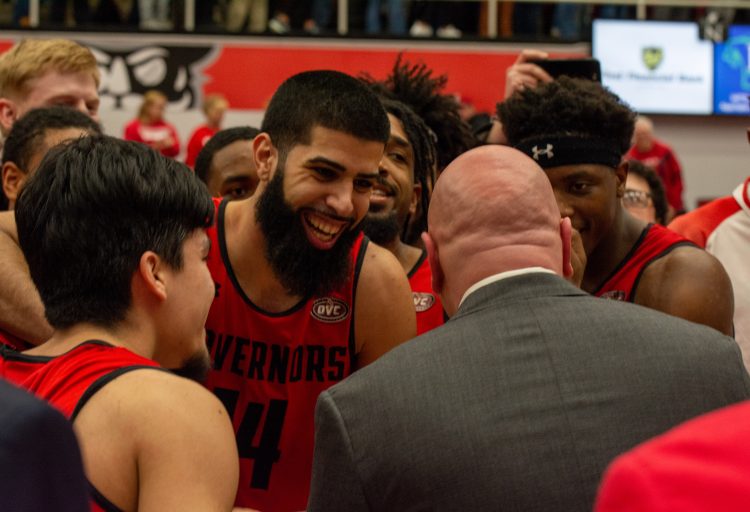