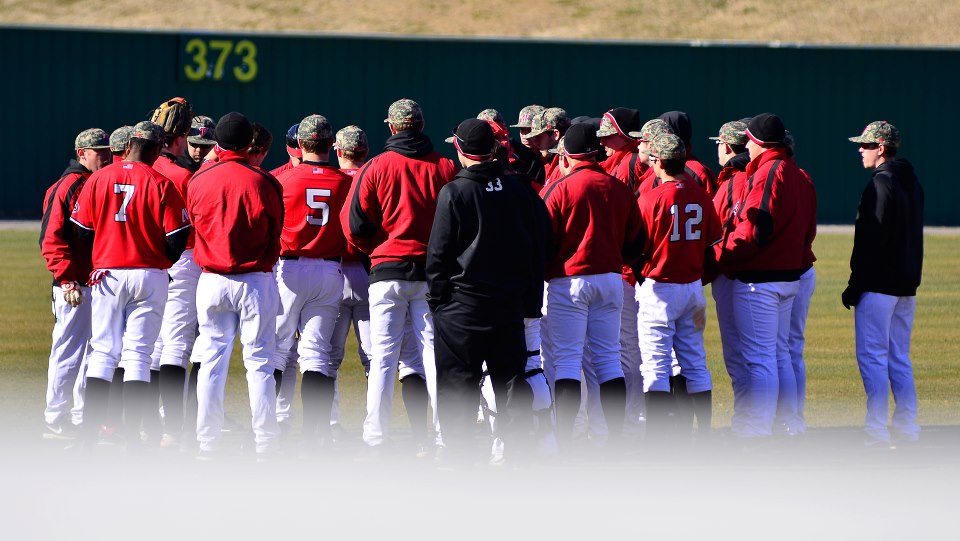 The APSU Bat Govs wrapped up the regular season on Saturday, May 18 with a 16-5 win over SIU Edwardsville at Raymond C. Hank Park, finishing the year winning 16 out of the 17 contests with a 12-game winning streak.

Prior to the game, the four seniors of the 2013 team — Casey Delgado, Reed Harper, Cody Hudson, and Tyler Rogers — were honored for their achievements over the many games played in a Governors uniform.

Head coach Gary McClure says this year’s senior class has been special, even with just four on the roster.

“Every guy was a big contributor. Two were starters for four years, one was a conference starting pitcher, and the other a closer,” McClure said. “They’ve all been a part of some really special teams and hopefully this one will be the most special out of all the teams.”

Both Harper and Hudson can look back to many memories having played at the home ballpark, but realize the true reward is awaiting in the future as the postseason is now days away.

“I’m hoping the one thing that makes it special hasn’t happened yet,” Harper said. “We got a few more weeks before that can be determined.”

“We got a ton of guys that have been there before,” Hudson said of the experience advantage this team has. “We got a bunch of juniors and seniors who have all been in that situation, so I think we’re ready for it.”

Similar to the previous two meetings, APSU got the bats clicking out the gate, and didn’t look back. With 19 hits in the game, the Govs were able to drive in runs at will against the SIU Edwardsville pitching staff, while the pitching staff of the Govs was solid in holding the Cougars in key spots.

Travis Becherer lined the first pitch he saw from APSU starter Ryan Quick to begin the game. After a fielder’s choice in the infield which failed to produce a double play, Joel Greatting singled to advance a runner to third, but Quick worked out of the jam by forcing a fly out to right field.

The Govs answered back with a first pitch single, with Dylan Riner singling through the right side. After back-t0-back walks by Jordan Hankins and Craig Massoni, Harper grounded into a double play, but allowed Riner to score from third.

Quick sat down three-straight batters in the second, and gave the offense an opportunity to score again. Michael Davis reached on a fielding error, and advanced to second on a fielder’s choice by Matt Wollenzin. Tommy Hager made the most of his chance to start in right field over Rolando Gautier, who didn’t play due to a wrist injury. Hager singled up the middle, easily scoring Davis on the play. With runners on second and third, Riner grounded out, but scored another APSU run to go up 3-0.

SIU Edwardsville tacked on a run in the third with a RBI double by Matt Highland, decreasing the deficit to just two runs.

In the bottom half of the inning, the Govs hit three singles in a row, with the last by Hudson scoring Massoni from second base. Another run would come across on a bases loaded walk by Hager, then after the third pitching chance for the Cougars, Davis would cross the plate on a walk to Riner.

The Cougars put together a string of three runs in the fourth, two of which coming on a two RBI single by Highland, increasing his total to three on the day.

The Govs got some help from SIU Edwardsville left fielder Nick Lombardo as he dropped a fly ball to allow Hudson to score. Wollenzin followed with a RBI single, putting APSU up 8-4. On a stolen base attempt by Wollenzin, the catcher was injured on the play and replaced by P.J. Torres.

Riner increased his RBI total to three in the game with a double in the fifth, adding an insurance run for winning pitcher Kevin Corey. Corey was very efficient on the mound, allowing just four hits in two and a third innings of work with four strikeouts.

APSU faced a jam in the seventh inning, as the Cougars put multiple runners on base. But Kacy Kemmer came in the game, and pitched out of trouble just like the junior has been doing all season long.

In the seventh, Hudson had a moment he will never forget as a senior, hitting a three-run home run over the center field wall. Davis followed with a solo shot off the foul pole in left field, putting the Govs up 13-4.

After a RBI double for SIU Edwardsville, Massoni blasted his team-leading 15th homer of the season, a three-run shot, to make it a double digit lead.

With the win, the Govs have clinched a first round bye in the Ohio Valley Conference Tournament, which kicks off on Wednesday, May 22 in Jackson, Tenn.