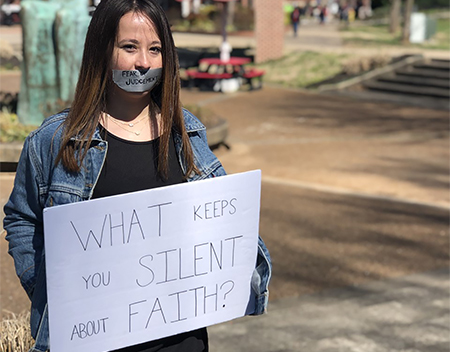 If you’ve been on campus in the past two days, you may have noticed the wood and string display in front of the UC, and people with duct tape over their mouths, holding signs that say “What keeps you silent about faith?”

The Chi Alpha Campus Ministry hosted a Soapbox event outside of the Morgan University Center starting on March 19, 2019.  The public forum challenged vulnerability as students were asked to share what kept them silent about faith.

“In a world where talking and being vulnerable and having real conversation isn’t normal, we want to make it normal at Austin Peay and so we want to be able to connect to people in a meaningful way and we thought this would be a pretty good way to connect,” Chi Alpha campus missionary Neely Lawson said.

All over campus people were standing with duct tape on their mouth holding up a sign asking, “what keeps you silent about faith?” The students holding the signs are not arguing or forcing an opinion. They are provoking conversation and thought. On the duct tape they share what keeps them personally silent.

“I was leaving Subway and I noticed one of them with duct tape and was stopped by one of [the missionaries] and the rest is history. We had about a 20-minute conversation,” sophomore communications major Sydney Chambers said. “I think this is beautiful.”

Once students make their way to the plaza there are strings set-up with several Chi Alpha members ready to ask students the same question and get them to share their answer. Once they do, it is written on the duct tape and left on the strings. Students are symbolically leaving that one thing holding them back, behind.

“By taking part, students are choosing to leave that one thing behind, and they go out the rest of their day and their week and maybe even their life moving forward,” Lawson said. “It’s a very honest place to have conversation. Just students talking to students about life.”

This is the first Soapbox that Chi Alpha has hosted at Austin Peay. The idea came up about six years ago from Chi Alpha freshman that ended up taking the event to another campus in Arkansas. The event had amazing feedback and students felt encouraged and challenged by it. Since then, the ministry has been occupied with other projects, finally making time for this one. Fortunately, it had the same turnout.

For the sake of privacy, students were not filmed and appeared to be a bit hesitant to answer questions.

“This is just an invitation to a conversation. It is an opportunity to hear where students are at and for students to ask themselves where they are at. The hope is that students will walk away today encouraged regardless of where they are at with faith and their personal lives,” Chi Alpha campus missionary Erik Cabrera said.

Click here to learn more about the Chi Alpha Campus Ministry. If you want a safe and welcoming environment to share your thoughts about yourself and your faith, Chi Alpha meets every Tuesday at 7 p.m. in the Clement Auditorium for “Talking Together on Tuesdays” (T3). 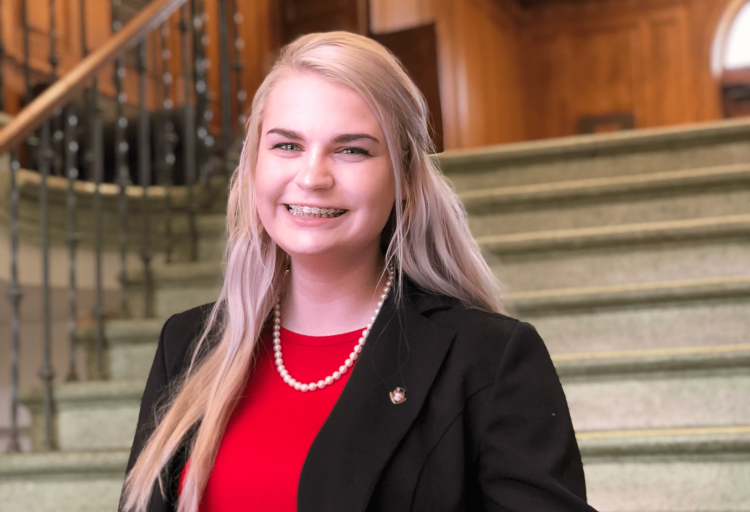