It was a holy trinity of miscues committed by the Govs that let the Cincinnati Bearcats generate 561 yards of offense as they mauled their way to a 72-10 win, September 3, at Nippert Stadium in Cincinnati, Ohio.

An inability to stop the run, five turnovers and eight penalties for 58 yards made a long day for the Govs. After returning the game kickoff for 60 yards, it took the Bearcats offense one play in less than 20 seconds to score their first touchdown.

Like a well placed punch to the nose, senior running back Isaiah Pead’s 40-yard dash to the end zone for the Bearcat’s first score stunned the Govs and they did not appear to recover the rest of the game.

“Cincinnati is a well coached football team. Coach Jones does a great job. They will be in the top two or three in the Big East because they have got players. They make plays,” said head coach Rick Christophel. “But we can’t play defense like that. That is not acceptable. We are going to get things changed.”

Pead was one of 12 Bearcats who produced 387 rushing yards and six touchdowns against the Govs. He led the team with seven rushes for 88 yards and two touchdowns.

Pead’s second touchdown came on the end of an eight-play drive that began after Gov junior quarterback Jake Ryan ended the Govs’ first offensive drive with an interception.

Ryan had two interceptions in the game. He finished the day completing 16 of 23 passes for 150 yards.

Ryan’s longest completion was a 36-yard strike to junior wide receiver Devin Stark. It set up the Govs’ first score, a 21-yard field goal by junior kicker Stephen Stansell in the third quarter. By then the Govs were behind 51-3.

The only other highlights came from the legs of tailbacks Ryan White and Wesley Kitts. The two combined for 127 hard fought yards and the Govs’ single touchdown in the fourth quarter.

Kitts plowed eight yards into the end zone at the end of an eight-play scoring drive with eight minutes left in the game. The Govs trailed 65-10 at that point.

Kitts finished the game with nine rushes for 65 yards. White got most of the touches, rushing 21 times for 64 yards. He also caught one pass for eight yards.

“I think we did some good things, but we did a lot of bad things. It wasn’t the outcome we wanted. We came out here with our heads up and they came out, they scored quick, and a lot of guys got their heads down,” White said.

“We have got a lot of young guys on the team. Our leaders on the team, our older guys have got to keep them going when bad things are happening. Our goal is to weather the storm when something bad happens and I don’t think we really did that today. Its something we are going to have to work on this week.”

The Govs will get an extra week to prepare for their next opponent. They will play the Memphis Tigers Saturday, Sept. 17, at the Liberty Bowl Memorial Stadium in Memphis at 6 p.m. TAS 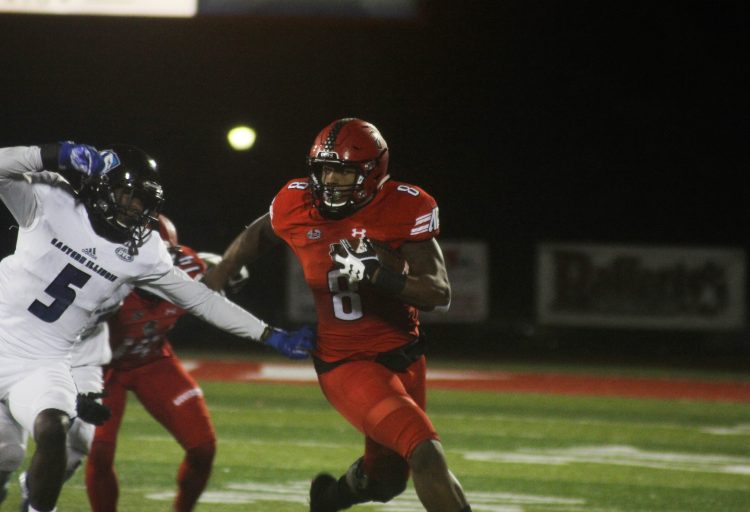