The weekend series was shifted to a doubleheader on Friday and the third game was played on Saturday. Austin Peay won the opening two games 5-4 and 10-1 respectively, but fell in the series finale 19-9.

In game one of the doubleheader Friday, Lee Ridenhour earned the win for the Govs by pitching seven innings, allowing all four Jacksonville State runs, and sat down six Gamecock batters with strikeouts. Kacy Kemmer came on in relief to pitch the eighth inning and didn’t allow any runners to reach base.

Senior closer Tyler Rogers picked up his ninth save of the season and 21st of his career, passing Daniel Tenholder for the most in school history.

“It sounds pretty cool,” Rogers said after breaking the record. “But I think it’s more about the type of team we’ve had the last two years to get that many save opportunities.”

Game two featured senior starting pitcher Casey Delgado taking the mound for APSU and he set a career high in strikeouts with nine. Delgado also allowed only one run and improved his record to 4-1 on the season.

“I had all my pitches working today and our defense was great,” Delgado said. “I just really wanted to fill up the zone and it worked out well for me.”

The offense for the Govs was on a roll Friday evening, giving Delgado eight runs of support. Reed Harper, three for five, and Craig Massoni, four for five, led the way with a combined four RBIs. Hankins contributed with a couple more RBIs with a two-run home run in the eighth inning.

But all great things must come to an end as APSU’s 4-0 OVC record ended on Saturday.

Jacksonville State scored four runs in the first inning; and the hits didn’t stop there. The Gamecocks tallied 23 hits, which led to 19 runs for the game, the most APSU has surrendered since 2011. The last time the Govs allowed more than 19 runs in a conference game was in 2009 against Jacksonville State.

APSU came back to tie the game 8-8 after the fifth inning, but the Gamecocks sealed the deal, scoring nine runs in the next two innings.

“We hit with guys in scoring position and never quit,” head coach Gary McClure said following the loss. “I like the way our guys came back and played good defense, but we just didn’t pitch well today.”

The Govs (19-4, 4-1) head out on a four-game road stretch starting Tuesday against nationally ranked Mississippi State then travel to Murray State next weekend for a three-game OVC series. 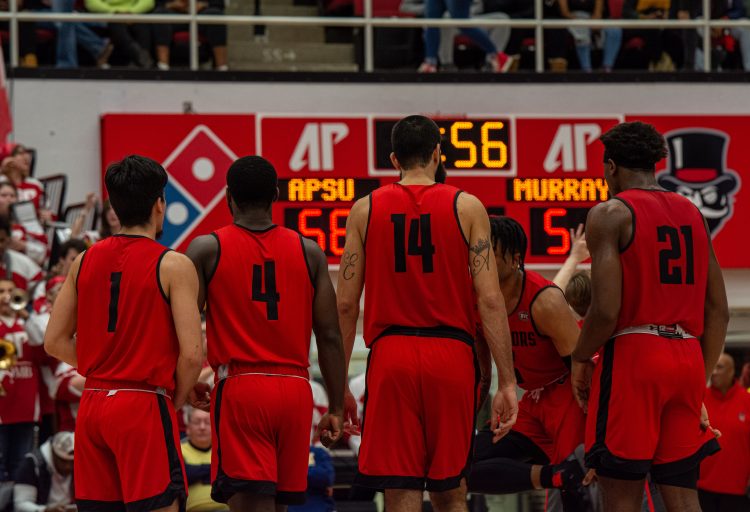